With eyes in the sky, science studies at Radford take flight 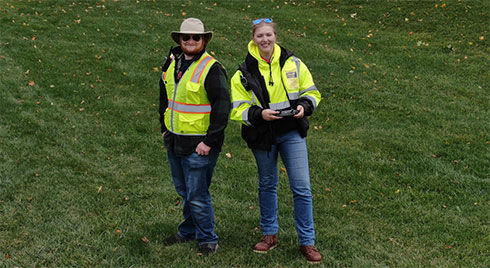 Once upon a time, not so long ago, the only tools an engineering geologist needed to collect cliffside data were a rock hammer, a compass, a rugged pair of boots and sometimes a climbing rope.

“In my career, I spent a lot of time rappelling and rock climbing in order to get the data,” said Skip Watts, Ph.D., professor emeritus in the Radford University Department of Geology. “I would use those tools, and in the old days, we would process a lot of this data by hand.”

One morning, about 25 years ago, Watts was on such a mission when National Public Radio phoned him at Yosemite National Park, where he was investigating discontinuities, or cracks in the rocks, that could lead to more landslides, like the slide that happened at the park a year earlier.

“Right now, I’m about 1,800 feet above the valley floor, sitting on a rock eating an apple,” Watts said, answering NPR’s Scott Simon’s question, “Where are you right now?” during the live radio interview. “I’m looking up Tenaya Canyon, and directly in front of me is the Merced River and two beautiful waterfalls.”

Collecting data while hanging from a cliff in places like Yosemite can be a breathtaking, awe-inspiring experience. It also can be dangerous. “We lost a climbing helmet, and we just listened to it bounce on the way down,” Watts said to Simon, providing a visual glimpse into the inherent dangers geological engineers face when scaling cliffs, trying to solve the Earth’s mysteries and make it a safer place to live.

But, in addition to the possible perils, collecting data “the old way,” as Watts said, can take a lot of time. “You might be able to get 100 to 200 data points in a day the way we used to do it,” he explained.

Times and tools have certainly changed.

These days, students and faculty in Radford’s Department of Geology are using a much safer and faster way of collecting data on cliffs and over mountains and along rivers: unmanned aerial vehicles, more commonly known as drones.

“In the old days, it would take all day just to get a couple of hundred data points while hanging off a cliff, but now we can fly a drone over and around a site and gets thousands of data points in 40 to 60 minutes,” said Radford University senior geology major Garrett O’Hara. “And we can do it all safely from the ground.”

This is not your parents’ geology program.

When you walk into Radford University’s Geohazards and Unmanned Systems Research Center, you might be amazed at the fleet of drones stationed around the room.

There are small drones, like the DJI Mavic 2 Mini, that can sit on your hand, and there is one large drone, the Matrice M600, which looks like it could have arrived from another planet. These drones are used by Radford students and faculty for flight protocol development, photography, mapping and research into battery life extension, to name a few operations.

O’Hara and senior geology major Kendra Bolen are the center’s student managers. Bolen’s responsibilities as the center’s overall manager include drone procurement, maintenance and inventory. O’Hara manages spatial data processing for the center, a position that makes him light up like a Christmas tree when he talks about his work.

The same goes for Bolen. “It is pure joy coming to work here,” she said. “I love walking into the center and seeing people who are wanting to learn and are excited about drones and also knowing I get to fly today. Being able to come to work smiling every day is a cool thing.”

Part of the work Bolen and O’Hara do involves teaching students, faculty, staff – anyone on campus – to fly drones safely and skillfully. It begins with TRUST certification as a recreational flyer and then moves on to stick and rudder, which is learning the basic controls.

“And then, we give them some time to fly around the lawn in front of Reed and Curie Halls,” said Bolen, who is FAA Part 107 certified. “Anyone can come into the center and learn to fly.” 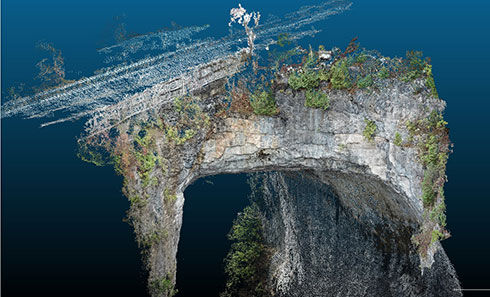 Above is a computer model of Watts’ work at Natural Bridge. The model was constructed by students in the UAS Center using data points taken from drone flights.

Teaching others is just one aspect of the students’ work at the center. They’re also heavily involved with faculty on research projects and community outreach, just as many geology majors before them, like studying rock slides on West Virginia roadsides, consulting on a mountainside hotel project in Maryland and helping Watts with studies on the disappearance of Mountain Lake and research on the structural integrity of Natural Bridge.

There at the bridge, in Virginia’s Rockbridge County, the field tool of choice is a drone.

“They are a pretty big innovation in this kind of research; we can just fly them around a structure like Natural Bridge and get tons of data,” O’Hara said as he spun a 3D, 360-degree computer model of the bridge on his large monitor.

“We can take all of the pictures and put them in a program called Pix 4D Mapper, for example,” he explained further. “The software takes all of the photos and assembles them into a model, and we can tell which rock formations are likely to break and which ones are hazards.”

Safety is a key component to students’ and faculty’s work at the center, and that sometimes means watching over Radford students, as they did on Highlander Float Day in August when many students drifted in boats and inner tubes along the New River.

Bolen and O’Hara were part of a team that day that piloted drones up and down the river and livestreamed video back to the Radford Emergency Services Center.

“We want to do our part to make sure everyone is safe,” Bolen said, “whether it be on campus or out in various communities. That’s what we are about.”

The UAV Center is one of many resources and opportunities open to geology majors, but it’s not all about geological research, as Bolen and O’Hara are quick to explain.

“You can use drones in business and communication studies and film,” O’Hara said, chiming in. “Some of these drones have fantastic camera quality.”

Everyone can benefit “from an eye in the sky,” Watts said later, sitting in his office explaining the interdisciplinary nature of unmanned aerial flight research. “It can be aiding police by flying over schools to create campus maps for incident planning, but it can also be geophysics and anthropology and archaeology.”

Bolen knows this as well as anyone. In addition to her geology major, the Salem, Virginia, native is minoring in anthropology. Last summer, she worked as a representative of Radford’s Department of Geology with Paleo Prospectors to help excavate a triceratops skull. Then she went a step further, constructing 3D models of the skull using drones from the UAS Center.

Bolen first learned about the center when she transferred to Radford University. She had meetings with faculty, who showed her around the UAS Center, let her sit in on a geology class with Watts and encouraged her to explore the department’s maker space, the Museum of the Earth Sciences and all the tools and resources available to students.

“It was a wonderful experience just getting to know the department and the professors,” Bolen recalled. “My professors knew me before I walked into my first class. They want students to be involved and to bring their creativity to the geology program.”

O’Hara transferred to Radford partly because of the UAS Center. He wanted to study at the university because he knew the educational experiences would lead him to a career field “involving structural analysis research and slope stability,” he said, and to working in a field where he can “help prevent hazards and make a difference in communities like our professors do.”

The faculty guidance and the field experience O’Hara get at Radford, plus the small class sizes and the “tight-knit geology department,” is the reason he loves Radford and loves working in the UAS Center.

Bolen, too. “All of this,” she said, “is what sets Radford apart from other universities. I have so much love for this department.”