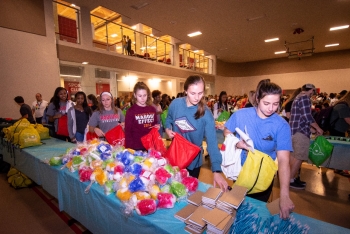 Students line up to pack kits for sexual assault survivors at the Fear 2 Freedom event in the Student Recreation and Wellness Center.

For the fourth consecutive year, the Radford University family turned out in full force to support the nonprofit organization Fear 2 Freedom (F2F) and elevate campus awareness of sexual assault and sexual violence.

On Sept. 26, close to 400 students joined faculty, staff and university administrators to assemble After Care kits for sexual assault survivors. These kits are intended for both adults and children and contain a set of clothing, personal care items and a stuffed bear. The kits for children contain crayons and drawing paper, while the kits for adults are packed with journals.

“As members of the Highlander family and the community, we do not tolerate sexual assault and other acts of sexual violence by or amongst our community members,” Vice President for Student Affairs Susan Trageser told volunteers at the “Hour to Empower” event.

“By being here and participating tonight, you are exemplifying the values of a Highlander. You are helping to be a part of the solution to end sexual violence.”

F2F is a Virginia-based nonprofit organization established in 2011 by Rosemary Trible, the wife of former U.S. Senator and current Christopher Newport University President Paul Trible. The nonprofit is named after the startling statistic that every two minutes, someone is sexually assaulted. Four decades ago Trible tragically became part of that statistic when she was raped at gunpoint – the perpetrator never to be found. F2F's mission is to redeem and restore those wounded by sexual assault, bring them hope and healing and change the cultural understanding of this issue by empowering and educating college students.

Since its establishment, F2F has hosted After Care kit assembly events on the campus of 24 colleges and universities in nine different states. More than 20,000 kits have been distributed across the country. 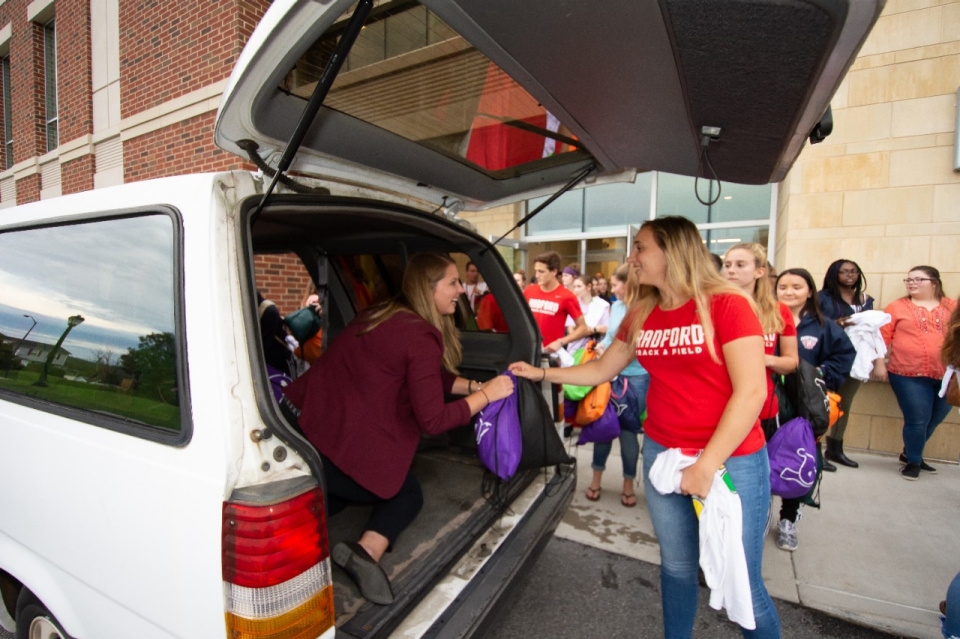 The Radford event was organized by the university’s Substance Abuse and Violence Education Support (SAVES) services. SAVES Assistant Director Julie Dill said she was proud of the diverse and energetic group of students who volunteered.

“I think this shows how compassionate our students are and how they want to be able to do something to help survivors,” Dill said. “This event is important to our Radford family because not only do we have an opportunity to raise awareness of and work toward preventing sexual violence, we get to help those in need. This event helps our student survivors as well as members of the community and gives us a chance to collaborate with our community partners.”

Student Government Association (SGA) Vice President Cody Hartley, a senior political science major from Lexington, said the event solidified Radford’s stance against sexual assault and violence. It’s a tragic issue that, unfortunately, all college campuses have to face, he said, and Radford chooses to face it together.

Following the event, students helped load several vans with the kits, which were delivered to the Carilion Clinic and the Women’s Resource Center in Radford.