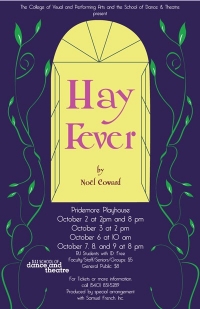 It’s 1924 and life is anything but humdrum at Cookham, home of the eccentric Bliss family. This fall, RU lights up the Pridemore stage with Hay Fever, the sparkling comedy from the pen of Noel Coward. Dubbed the master of British light comedy, Coward bestows on us Hay Fever’s bevy of talented, impulsive, and frustratingly lovable characters infused with the vibrancy of his own early life in high society on both sides of the Atlantic. 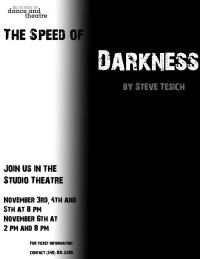 Joe has it all –a loving family, a successful business, the respect of his community and now a nomination for Man of the Year. But with the unexpected appearance of an old Army buddy the truth begins to unravel the lies at the base of Joe’s idyllic life and the society in which he lives. A haunting family drama, The Speed of Darkness is by Steven Tesich. 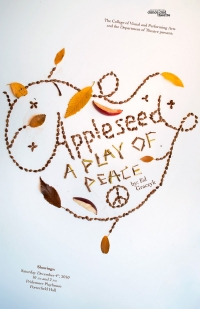 Appleseed: A Play of Peace by Ed Graczyk
December 4th at 10am & 2pm

Ed Graczyk’s Appleseed opens with the beat of a lone drum as an aging Johnny Appleseed retraces his pilgrimage through the Frontier Midwest. With love in his heart the American legend spread his message of peace, making friends with animals, protecting natives and settlers alike, and always planting his beloved apples. Join Johnny and his band of unlikely friends on their mission to remind all that this message of peace is as timely today as it was in Early America. 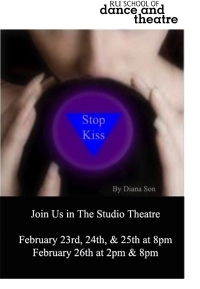 When an unanticipated attraction between two friends ignites a response so strong it nearly kills them, one struggles to survive as the other is left to pick up the pieces. Stop Kiss by Diana Son is a quirky but moving play of self-discovery and love in an unforgiving world. 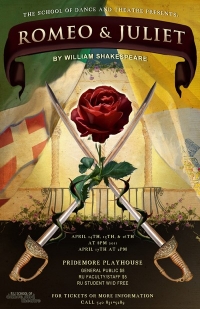 One of Shakespeare's best known and most beloved tragedies, Romeo and Juliet, is the story of love forbidden by the deep-seated enmity between two families. Set in motion by a chance meeting, the tale includes a secret marriage, a double murder and culminates as the “pair of star-crossed lovers" are united forever. Don’t miss as this perennial favorite comes to RU for the first time!

Directing II Scenes: Ignorance is Bliss
An Evening of One Acts

The Directing II: Theatre 450 students proudly present their final projects. Come discover along with an outrageous assortment of characters in six exciting plays if "what you don't know, can't hurt you."

April 27 and 29 at 7 pm The projects of Gregory Sosnicki, Joe Toscano and Lyndsay Halpin perform.

April 28 and 30 at 7 pm The projects of Aaron Mowles, Christopher Scott Smith and Chelsea Burke perform.

Dr. Vivian Bearing has ascended the heights of her profession as an expert on the Holy Sonnets of John Donne. But when she is suddenly diagnosed with terminal cancer she faces the reality that she has never truly understood the poet's metaphysical struggles with death and the afterlife. In these last few hours of her life, she gives her audience a final, grand, lecture-by-example, on how to die and maybe a bit on how to live.