When possible the Department of Theatre welcomes theatre and film artists to participate in our productions, classes and feature events. These guests—actors, directors, musicians, designers—all working at the top of their craft, are a window to the professional entertainment world. They inspire our students and invigorate our programs by sharing their vast experience and imparting fresh insights. Among those who have visited over the years—Eileen Heckart, John Amos, Bridget Hanley, Conrad John Schuck and Sally Struthers.

Rafael Untalan is a D.C.-based actor, and member of Actor’s Equity Association and SAG-AFTRA. He has been seen onstage at a variety of professional theaters across the country, including Virginia Repertory Theatre,Arena Stage, Cleveland Play House, Theater J, Cincinnati Playhouse in the Park, Portland Center Stage, the Colorado Shakespeare Festival and the Oregon Shakespeare Festival, where he was a company member. Rafael was also part of the 2013 Helen Hayes Award winning ensemble of Anime Momotaro at Imagination Stage. He holds an M.F.A. in Classical Acting from the Shakespeare Theatre Company’sAcademy for Classical Acting at the George Washington University. 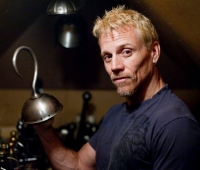 Robb Hunter (Fight Director and proud alumnus of Radford University, class of ’91) Is a Fight Director and Movement Choreographer based in the Washington DC metro area. He is a member of SDC, AEA and SAG/AFTRA and is a Certified Teacher, Fight Director and Theatrical Firearms Instructor for the Society of American Fight Directors. He is currently the Combat Instructor for The Shakespeare Theatre’s MFA program (The Academy for Classical Acting), Fight Choreographer in Residence at American University and a member of the MFA faculty at The Catholic University of America. While in New York City he was fortunate enough to have spent three years working closely with Michael J. Fox, including several ‘thrills and spills’ as his stunt double. As the founder of the theatrical prop weapon company, Preferred Arms, Inc., he literally faces each day, ‘sword in hand.’

Barry Ratcliffe actor, producer, and motivational speaker recently shared his film “Dorothy and the Witches of Oz” with students, faculty and the public at a screening in the Pridemore Playhouse. In a question and answer session following the screening, Barry fielded questions ranging from “What was it like to work with Bruce Willis?” to “How challenging was it to act with the lion’s teeth?” He spoke a lot about making the film, even revealing information about the special effects. While here, he also led a master class, giving numerous insider actor tips on casting, marketing, online promotions, headshots, auditioning, agents, and career management.

Mark Beall music director, producer, composer, came from Nashville, Tennessee to provide musical direction for RU Theatre’s highly successful production of A Funny Thing Happened on the Way to the Forum. Having trained at Manhattanville College, Cincinnati's College Conservatory of Music, and the Ecole d'Arts Americaine, Beall has worked on more than thirty-five different musicals at numerous theatres. His compositions range from animated film scores to chamber opera. He has taught at Belmont University and Vanderbilt University's Blair School of Music. Beall brought a wealth of knowledge and experience to his interactions with RU students as he led them to the staging of a smash musical!

Golden Globe and two-time Emmy winner Sally Struthers joined RU Theatre and Cinema to play Aunt Sally in Fifth of July and Big Mama in Cat on a Hot Tin Roof. Best known as Gloria in the landmark sitcom “All in the Family,” the multi-talented Struthers is a star of regional theatre, Broadway, TV and film. Of working with the students at RU she said, “I just feel energized when I am around young, talented people. So it’s always fun to do that as a switch out from highly trained professional older people who are also great, but there is something about these kids that’s amazing.”

Alumnae Actresses from "The Importance of Being Earnest" Interview

Two Radford University theatre alumnae were guest artists in the Pridemore Playhouse main stage production of "The Importance of Being Earnest." Former School of Dance and Theatre director, Carl Lefko, interviewed Alicia Sable and Kathleen Harshberger during the spring 2017 semester about their acting experiences. 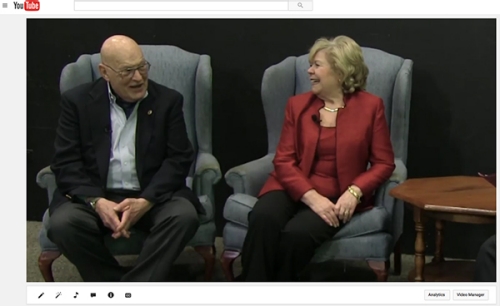 A Life in the Theatre:
An Interview with Dick and Kathleen Harshberger

Meet our guest artists Dick and Kathleen Harshberger, who were in our production of Anything Goes. Click here to view the video.