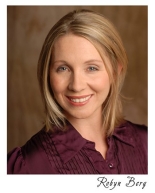 Robyn Berg is a Chicago native, who has also spent many years in New York City and Nashville as a professor, actor, director and teaching artist. She holds a BA in Theatre Performance and Radio/Video Communications from Bradley University (also studying abroad in London) and an MFA in Acting from the University of Florida (also performing Lysistrata in Greece for UF). She has a keen interest in holistic health and is constantly striving to find ways to combine wellness and art. She offers a weekly yoga session to theatre majors, regularly incorporates meditation into her acting classes, often discusses the value of eating whole/real foods and encourages all artists to sleep well, soak in nature and develop a gratitude practice.

At RU, Robyn serves as a member of the Theatre Performance faculty, the chair of Assessment for the department, and is an affiliated faculty member of the Women’s and Gender Studies program. She has also served as a member of the University Performance Series Committee (bringing Bread & Puppet Theater, American Shakespeare Center and the National Players to campus) on the Season Selection Committee, and on Faculty Senate. She has taught Acting 1, Acting 2, Acting 4, Voice and Movement, Advanced Movement, Dance & Theatre Collaboration, Theatre Aesthetics, Honors Theatre Appreciation, Theatre Appreciation, Theatre History I, Theatre History II and Survey of Drama. She has traveled with RU students to Dublin & London and New York City and has advised countless capstone projects, honors contracts and production practicums.  On an interdisciplinary level, she has worked with the department of Communications Sciences and Disorders in their Speech Language Hearing Clinic and for their Language and Literacy Camp, guest lectured in the English department for their Readings in Shakespeare course and guest lectured in the Dance department on the work of Rudolf Laban in their Beginning Modern Dance and Intermediate Modern Dance courses.

Robyn has presented research at the Women’s Theatre Festival, has performed in the New Play Development Workshop at the Association for Theatre in Higher Education conference and has performed in a Medieval French farce for the International Congress on Medieval Studies. She is acknowledged in the textbook Acting: an Introduction to the Art and Craft of Playing by Paul Kassel. Robyn is an eligible member of Actor’s Equity Association, as well as being involved with ATHE and the Association of Theatre Movement Educators. She will soon complete her 200 hour Yoga Teacher Training and be certified with Yoga Alliance.  She is currently co-writing a book on acting and mental wellness with therapist Bonny O’Neill, MS, LPC-MHSP.

Favorite acting credits include the title role in Walk to Freedom: The Mary Draper Ingles Story, Nashville Shakespeare Festival’s Julius Caesar (alongside NFL legend Eddie George), Romeo & Juliet and Amadeus (opposite Tony nominated star Robert Cuccioli) at The Shakespeare Theatre of New Jersey, and A Christmas Carol, Night of the Living Dead and Alice in Wonderland at The Hippodrome in Florida. She has also appeared on screen in multiple commercials, industrials and independent films.

As a director, Robyn was honored to receive the Kennedy Center/American College Theatre Festival Excellence in Directing Award for Shrek. Other memorable experiences at the helm include Death of a Salesman, The Servant of Two Masters, Leading Ladies, Proof, Once Upon a Mattress. At RU, Robyn has directed The Rainbow Fish Musical, Fabulation or the Re-education of Undine, Urinetown, Almost Maine, Rapture, Blister, Burn, The Diary of Anne Frank, Dr. Seuss’ The Cat in the Hat, Lilly’s Purple Plastic Purse, and Before and Beyond Words, a devised piece. Other recent credits include Movement Coach for Washington & Lee University’s James and the Giant Peach and Dialect Coach for Morraine Valley Community College’s A Day in the Death of Joe Egg.