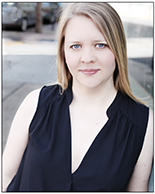 Molly Hood is an actor, text coach, director, and professor.  She holds an MFA in Classical Acting from The Shakespeare Theatre Company Academy for Classical Acting at The George Washington University.

Molly appeared as the title role in Hamlet for The Richmond Shakespeare Festival, which was filmed and broadcast on PBS by Virginia Public Media, and for which she received a Richmond Theatre Critics Circle Best Actress nomination.  Other favorite acting credits include: Elizabeth in Richard III, Regan in King Lear, Luciana in The Comedy of Errors, Nerissa in The Merchant of Venice, Witch #1 in Macbeth, and Arianna in The Comedy of Errors (RTCC Best Supporting Actress Award Winner) for the Richmond Shakespeare Festival, Carol in Oleanna (RTCC Best Supporting Actress nomination) for Cadence Theatre, Corie in Barefoot in the Park, Myra in Hay Fever, and Melissa in Melissa Arctic for Virginia Rep.  Molly also helped to craft a series of reverse-gender readings of Shakespeare’s plays in the Richmond community, where she performed such roles as Benedick in Much Ado About Nothing, Sir Andrew Aguecheek in Twelfth Night, and Macduff in Macbeth.

As a director, Molly’s credits include: The Drowsy Chaperone, Wonder of the World, The Tragedy of Macbeth, Junie B. in Jingle Bells, Batman Smells, and Crimes of the Heart at Radford University, Twelfth Night and The Two Gentlemen of Verona at The Richmond Shakespeare Festival, Buffalo Soldier at Virginia Rep, Twelfth Night at SPARC and Funny Money at Hampden-Sydney College.

Molly’s current areas of interest include staging theatrical intimacy, stage combat, historical performance, and staging jigs as part of Shakespearean performance. Most recently she collaborated with RU students, alongside theatre students and faculty at Virginia Tech to produce “Performing History: Women and the Vote.”