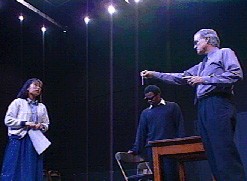 Professor Emeritus Charles L. Hayes taught at Radford University for forty years. He primarily taught acting, directing, theatre history and literature and cinema. Mr. Hayes has directed for theatre, opera, film, radio and television. At RU, "Chuck" directed over forty productions and created over twenty-five roles as an actor. He gave a particularly stirring portrayal of Big Daddy in Tennessee Williams' Cat on a Hot Tin Roof just prior to his retirement. He worked with the Virginia Governor's School for the Arts for four years, even serving as its director for two years (’87,’88) during its previous tenure on the RU campus. Also, he was coordinator of Radford's exchange program with Middlesex University in London. Over the years he has adjudicated for American College Theatre Festival, judged innumerable play festivals, consulted on theatre projects throughout the Commonwealth and conducted a wide range of workshops for various theatre conferences and professional organizations.

Mr. Hayes is the published author of plays, poems and short fiction. His plays have been performed in Florida, Virginia and Hawaii. He served as editor of Virginia Film Notes, published in, and was editor for, The New River Review and was consulting editor to The Film Journal.

For the university, he was Faculty Athletics Representative to the NCAA for thirteen years, chaired the university’s committee on athletics, the Hall of Fame Selection Committee and various committees for the Big South Conference.

Since his 2007 retirement, Professor Hayes has taught part-time for the Department of Theatre and Cinema and has worked on several special projects for the university including coordinating design of RU’s new website.

In closing, Chuck stated, “I’m grateful for the many wonderful students and outstanding colleagues I’ve been able to work with over the years.”