Offbeat comedy ‘Wonder of the World’ coming to Pridemore Playhouse 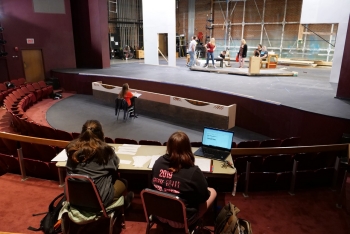 Assistant Professor Molly Hood (center) watches as the cast of "Wonder of the World" rehearses a scene in Pridemore Playhouse.

On Tuesday, October 1, 2019, at 7:30 p.m. the Department of Theatre and Cinema will debut “Wonder of the World” to audiences at Pridemore Playhouse in Porterfield Hall. The production is a comedy written by Pulitzer Prize-winning playwright David Lindsay-Abaire. The play’s director, Assistant Professor Molly Hood, says that the theatre program decided to bring “Wonder of the World” to Pridemore Playhouse because the material is tremendously funny and it has been a while since the program showcased a comedy on the main stage theatre. “It’s the wackiest play I’ve ever directed,” she said. “After directing ‘The Tragedy of Macbeth’ in spring, this is a refreshing palate cleanser.”

Hood says that there are many challenges that come with working on this production. “Comedy is harder than drama,” she says. “It expends a lot more energy and requires more attention to detail than people realize.” Actors must become comfortable with the nuances of timing and intuition in order to elicit laughs from the audience. Hood also says that the playwright has very specific, clever choices in the play, and when the cast places their trust in the script it all comes together in a very fun way. “I’m having the best time ever… even though I’m exhausted,” she joked.

“Wonder of the World” carries unique demands for the crew as well. Each scene jumps to a new location, with only a few settings appearing more than once in the program. Lindsay-Abaire specifically wrote in his notes that nothing should slow down the flow of the play, meaning that sets must quickly change between scenes to keep the story moving. This is where Associate Professor Jimmy Ray Ward and his team must work creatively to design sets that can accommodate the intense pacing. Their solution was to develop a series of stylized, minimalist sets that can quickly be built and deconstructed, but that also complement the artistic direction of the play. “We asked ourselves what were the primary elements that were important to each scene. You don’t want to bog the story down by showing every detail in full, so we approached it by determining what was essential to tell the story,” said Ward, who oversees theatre design for the program. “It’s a bizarre play, and we found that making bold, bizarre choices worked well, so that’s what we went with.”

Hood says that audiences can expect a lot of laughs from this production. “It is a very smart comedy and the audience is going to have a really good time. Some theatre exists to educate or enlighten us, but this play is pure entertainment.”

“Wonder of the World” plays October 1, 3, 4 and 5 at 7:30 p.m. with a final showing on October 6 at 2:00 p.m. The play contains adult situations and language. Tickets are on sale now at www.rutheatretickets.com