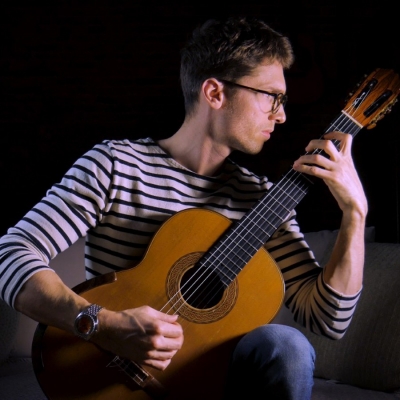 French guitar phenomenon Dr. Thomas Viloteau, widely considered one of the most gifted classical guitarists today, will perform live on the campus of Radford University on Friday, November 13, 2020. Viloteau will offer a guitar masterclass from 4:30 until 7:00 p.m. that afternoon, followed by a concert performance at 7:30 p.m. Both events will take place in the Davis Performance Hall in the Covington Center. Due to social distancing restrictions, the audience will be limited to a total 38 attendees. Guests will be required to have a Radford University identification card (RUID) for admission.

Dr. Robert Trent, Director of Guitar Studies for the Department of Music, is excited to be able to host Viloteau on campus. “This concert and masterclass by the young, French, guitar virtuoso, is an event not to be missed!” said Trent.

Viloteau’s first concert was in his home country of France only a year after he began playing. Since then, Thomas has performed globally to audiences in the United States, Canada, Mexico, Germany, the Netherlands, Italy, Spain, Norway, Sweden, Great Britain, Taiwan and Puerto Rico.

His book on guitar technique, “In the Black Box, Technique(s) of the Classical Guitar,” has sold more than a thousand copies worldwide. He has been the Artist-in-Residence at the radio show “Performance Today,” broadcasting his playing performances to more than a million people across the United States. Viloteau has released recordings with Naxos, Mel Bay and La Ma de Guido. His two latest albums, “Dances Through the Centuries” and “A Song and Dance” released on Tigado, contain world premiere recordings of the “Suite Brasileira 3,” which was commissioned and dedicated to Viloteau, and of the “Suite Brasileira 4,” each by Sergio Assad.

Viloteau has lived in Barcelona, Paris, San Francisco, London, Arizona, Montréal and Rochester, NY. In 2019, he joined the guitar faculty at the Peabody Institute of the Johns Hopkins University in Baltimore, MD.

Information and reservations can be made by contacting the Department of Music at 540-831-5177.