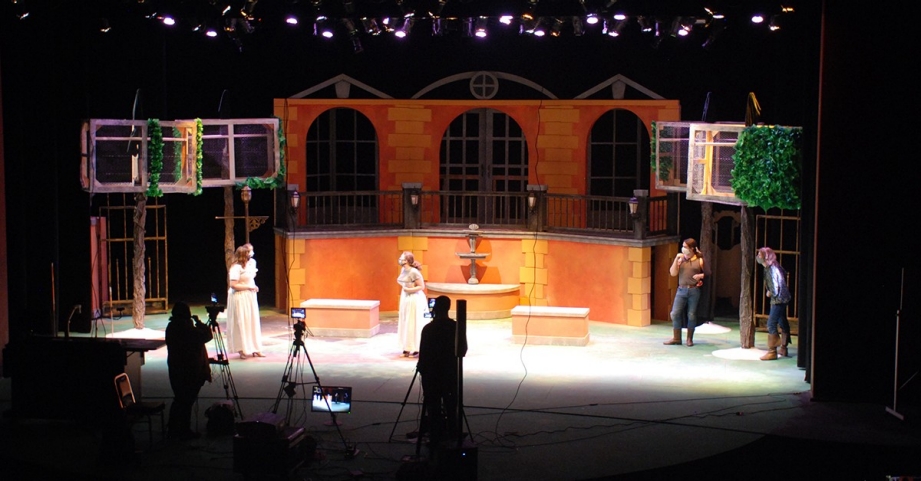 Student cast and crew members rehearse "The Liar" on the stage of Pridemore Playhouse in Porterfield Hall.

In 1643 a young law school student by the name of Dorante arrives in Paris for a visit. His biggest flaw is that he is prone to lying about, well, most everything, actually. When Dorante falls in love with a woman he meets shortly after arriving in the city, a case of mistaken identity becomes a central thread that entangles the characters in a web of lies and comedic trouble.

Directed by Assistant Professor Molly Hood, “The Liar” by David Ives will stream to online audiences April 7 through 11, 2021. Hood says that her cast and crew have really made the production experience enjoyable. “The students are incredibly energetic and funny,” says Hood. “Rehearsals have been a blast. We’ll look at one moment of the play and they’ll have five different suggestions for how to approach it. It’s been absolutely wonderful to have such an energetic team who isn’t afraid to play with ideas.”

The production cast and crew continue to work in ways that differ from putting together traditional theatre presentations. Streaming to online audiences requires introducing technical elements much earlier than with standard production schedules. Cameras and microphones were added as rehearsal elements early in the production timeline, and students had to memorize their lines much earlier than usual in order to prepare for the additional technical challenges that accompany a live streamed production. “The students have done a great job handling the extra requirements. They’ve really delivered,” says Hood. 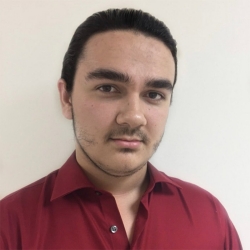 Junior theatre major Logan Burnley portrays the lead role of Dorante. He says that his first leading role in a production for the Department of Theatre and Cinema has been a challenging yet rewarding experience. “The role is very athletic. Dorante loves to tell fantastic stories and he often acts them out to other characters in the scene at a frenetic pace. You have to be able to talk and jump around for minutes on end without becoming fatigued,” says Burnley. He was excited to be cast in the role because classical acting is something that has appealed to him since attending a classical comedy production at the American Shakespeare Center where he became enamored with the genre. When the casting call went out for a classical comedy production at Radford University, he knew that he wanted to be involved as much as possible. In addition to playing the lead character, Burnley also works in the scene shop helping to build sets for the show. 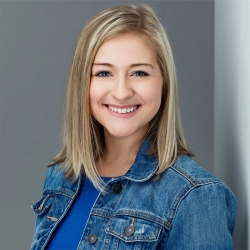 Madison Lawson is a senior theatre major playing two characters, Sabine and Isabelle; twin sisters with polar opposite personalities. The sisters are maids who grow wise to Dorante’s fabrications and begin feeding him their own lies to toy with him. The opportunity to portray the two characters was appealing to the graduating senior, and she enjoyed embracing the challenges it presented. “I typically play girl-next-door characters, so to play someone like Sabine is exciting because she’s strong and strict and kind of mean. Isabelle, on the other hand, is flirty and sensual. So, I’ll be playing a scene where I am being bossy and mean and slapping people in the face, then I walk off camera for a moment and return as the sister with a complete opposite personality. It’s a lot of fun,” says Lawson.

Working on a comedy project has been a relief for Hood and her team. “I’m excited that it is a comedy with love stories in it. People have been shut up in their houses for a year. We could all use a laugh right now, and the script is very intelligent and funny,” says Hood. The play’s dialogue is written in a modernized version of Shakespeare’s famous iambic pentameter, but Hood says this shouldn’t deter audiences from tuning in. “It is not as heavy as Shakespeare and the rhythm of dialogue is very easy to pick up,” says Hood.

Students in the production were also excited about the costume designs. The story takes place during the Baroque period of France, so intricately designed corsets, doublets, and accessories are part of what makes the production a visually engaging experience. “I am in love with my costume,” says Burnley. “The cape, the sword, all of it. When I’m in the costume I feel like I am the character. As soon as I was finished with my fitting, I wanted to get back into it,” he laughs.

“The Liar” contains mild sexual themes and adult language. The production will stream live to audiences on April 7, 8, 9 and 10, 2021 at 7:30 p.m. EST, with a final showing on April 11 at 2:00 p.m. Tickets are available at https://rutheatretickets.universitytickets.com/