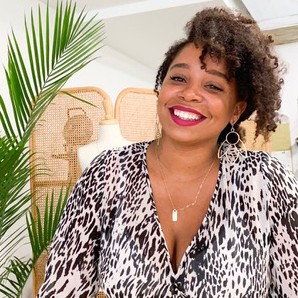 On April 27, 2019, Radford University alumna Brittanny DeRaffele celebrated a milestone in her career; she opened her own jewelry and metalsmithing gallery in Richmond, Virginia. Her accomplishment marked the close of a phase of her career, which, ironically, started off as a result of what appeared to be a costly mistake.

In 2008, during her senior year as a fashion design major at Radford University, Brittanny DeRaffele (her last name was Phipps at the time) received some devastating news. A miscommunication regarding paperwork for a required internship meant that she would not be graduating on time. “It was a very simple error on my part that could have been avoided,” said DeRaffele. Despite efforts from her professors to work around the problem, there was no way for her to graduate on time. “God bless my professors, Dr. Doss and Dr. Robinson. They did everything they could to try and fix it so that I could graduate, but it just didn’t work,” reflects DeRaffele. “I was so upset because I had completed four years with a lot of people who were graduating and I was really close with and all of them and they were going to be leaving but I couldn’t yet.” Little did she know that the seemingly costly error would set her on a career path that would change her life. 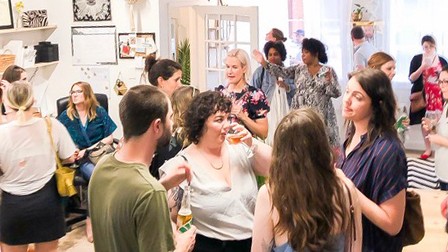 Patrons mingle during the opening of 'Sun and Selene.'

Upon realizing that she would have to take extra courses to graduate at a later date, she took the advice of her fashion design professors and picked up a minor in studio art. She had spent several summers earning extra money during college working with an aunt at a jewelry shop and was curious about making jewelry, so she signed up for a metalsmithing class with Professor Alison Pack. Pack’s approach to teaching was instantly inspirational to her. “It was day one of metalsmithing and I just couldn’t believe how much I fell in love with it,” says DeRaffele. “It changed everything. I knew in that moment that I would need to take a series of classes to earn the minor in metalsmithing. I decided to take as long as I needed to learn everything I could about jewelry making. I knew that I wanted to take what I had learned through my fashion design and merchandising studies and merge that with jewelry making at some point in the future.”

DeRaffele wound up taking two extra years to finish her metalsmithing studies and completed her undergraduate degree in 2010. She immediately began pursuing her newfound passion as a side business. In the beginning, she learned a lot about marketing jewelry through trial and error. She wasn’t sure how to calculate prices for her original works, so often she was not making any profit. In the early days, she was so excited to have people interested in her work and purchasing it, that she did not focus on making money from her labors. Realizing that business model would not be sustainable, she took some retail and wholesale courses on Skillshare, which helped her refine her price points in ways that were affordable to customers, but also allowed her to make small profits from her labor. 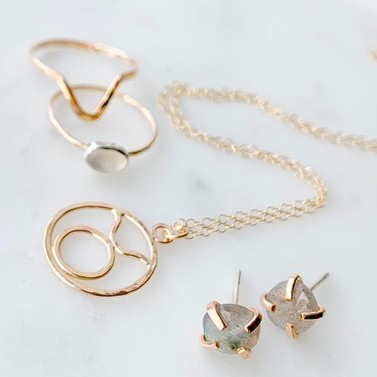 A product image by Brittanny DeRafelle showcases her jewelry creations.

Of course, there were other challenges during those early years as well. Without a studio to make jewelry, DeRaffele created a makeshift workshop in a spare bedroom of her apartment. “I had a torch. I had a window space so I had good ventilation. I had the bare essentials to work, but I didn’t have a lot of time,” says DeRaffele, who paid her bills by working as a full-time restaurant bar manager while running her jewelry business on the side. She started a website to sell her work and found that as demand grew, she needed even more space to do product photography along with a separate area to pack and ship orders, so workspace became more of an issue as her business began to encroach upon the living areas within her apartment.

For three and a half years, DeRaffele and her husband made the cramped apartment space work, but the time came for her to expand again, and this time she knew she would have to make substantial changes to grow the business. Encouraged by her husband, she made the difficult decision to quit the restaurant industry and turn her full attention to her jewelry-making business. “That was definitely the biggest challenge; taking the leap from a full-time job to being a full time jeweler,” said DeRaffele. Starting out she worked from order to order, taking whatever profits she made from sales to purchase more materials and expand her inventory. She also looked for local marketing opportunities such as sidewalk sales and flea markets to meet new potential customers. “I took every opportunity that I could to be in front of people, walking into stores and asking them about consigning jewelry… it taught me so much and I met a lot of great people along the way,” said DeRaffele. 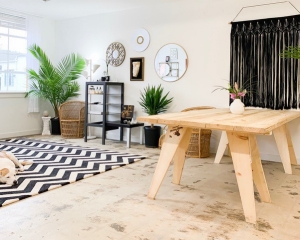 An interior look at 'Sun and Selene.'

The Internet, and social media in particular, have been instrumental to her success. “It’s the reason I’m in business today,” she said. “Social media is free, you can reach tons of people, and everyone has it in their hands all the time.” She found that Instagram, in particular, performed very well for her and gave her a lot of exposure to new audiences. She worked to improve her photography skills to cut down on the costs of hiring professional photographers for product shots. According to her, this skill paired nicely with being able to push professional-looking images of her work, allowing her to grow her following on social media.

While DeRaffele was planning to make the move to open a professional studio, she also made the decision to rebrand her product line with the name “Sun and Selene.” According to DeRaffele, “Many of my works revolve around ancient mythology – the variety of goddesses and the meanings behind them. I would name different pieces after them and Selene, the goddess of the moon, was one of my earliest designs and remains one of the best selling.” She also noted that her Zodiac sign aligns with the moon, and these became the inspiration for her business name. 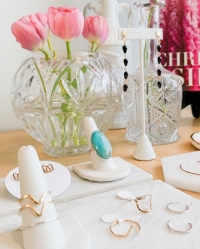 DeRafelle's fine jewelry creations on display at 'Sun and Selene.'

“Sun and Selene” began a new chapter in April with the opening of a gallery space. She attributes her success to her years at Radford University and the experiences she had studying under professors in both the fashion design and metalsmithing programs. “The time I had at Radford in metalsmithing, fashion merchandising and design; I’m utilizing every bit of what I learned. Our big project in fashion merchandising was to build a business plan. Those lessons were crucial to me being able to plan for my own studio space,” says DeRaffele.

As the sun and moon continue to shine on DeRaffele's career, her future appears brightly lit. Her studio space in Richmond, Virginia is open and can be seen by appointment. More information about her work and merchandise can be found on Instagram, Facebook, or at her website: https://www.sunandselene.com/