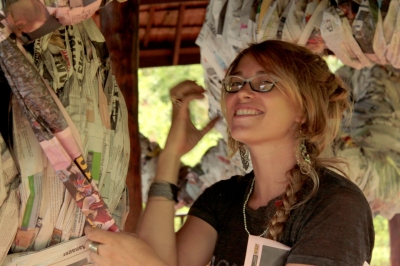 Erin Turner working on one of her sculptural forms. Photo courtesy of James Hubrecht.

A storm lurks within the Radford University Art Museum at the Covington Center. Erin Turner’s “Strange Weather” takes over the gallery Sept. 29, inviting viewers to come in and explore her large sculptural newspaper forms suspended from the ceiling and the walls.

The paper in her sculptures is a mixture of newspapers from sources such as The New York Times, The Roanoke Times, those she collects while traveling, and ones she designs and prints. She chooses each intentionally based on their content, site and time specificity.

Newspapers, concrete and epoxy are the materials found in her smaller works. 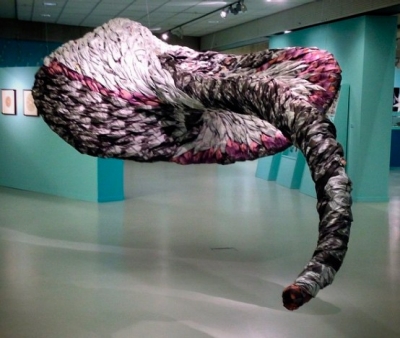 “These sculptures question the ephemerality of the newspaper material and content of the news while solidifying certain headlines in concrete,” Turner said. “The pieces evoke an idea of a present-day archaeology, questioning how the headlines of today will be found in the future, the physical newspaper itself as a potentially dying form, the methods of portraying the news, and the partisan divide in the conversation on climate change.”

Turner is a site-specific installation artist. Her education spans continents and includes Pratt Institute, La LLOYTA in Barcelona, the University of Tulsa, and La UMSA (Universidad de Museo Social Argentino) Buenos Aires, receiving her BA in Fine Arts with an emphasis in Painting in 2007. She was a guest lecturer at the Tulsa Community College and is an MFA candidate in Social Practice at Queens College. She lives between the Rockaways, New York City and Upstate New York.

Because Turner considers herself a modern nomad, she transitioned from making oil painting representations of natural phenomena to sculpture.

“Newspaper and chicken wire became the materials of choice due to the fact that they can be found almost everywhere, from small island territories in Thailand to rural India,” she said. “While looking at the symbolic representations of natural phenomena across the world, I decided to turn an eye toward my homeland of Oklahoma, positioned in the middle of Tornado Alley. Always in awe of the shift in weather during the storm season, watching the numerous tornadoes spin across the radar system, wall clouds, electricity, yellowing skies, and the idea of the eye of the storm all became a symbol of home, of change, of power, of natural control, as well as a symbol of climate change.”

She begins with a wire-armature skeleton structure and frames it with chicken wire. Then she selects newspapers based on content and color, sometimes designing and printing her own images onto newspaper to embed meaning and symbolism. By weaving the paper into the wire structure, she creates the organic facades.

Collaboration is another important concept for Turner. The idea behind “Strange Weather” is a series of collaborations, workshops and conversations with different communities. Her primary narrative focuses on severe (and changing) weather, how people currently communicate about this topic, and the impact on specific communities.

“It came from the initial inquiry into how people were talking about climate change without saying the term, without believing in the term, and without being able to see outside of the politization of the term,” she said. “How do we communicate about this thing some of us call climate change in a way that relates to all of us? Some agricultural magazines have started to create that conversation by simply changing the term: strange weather. Depoliticizing language may help to switch the conversation toward boosting the economy, renewable energies, carbon sequestration and sustainable practices.”

The collaboration with Radford University includes the Departments of Art, Dance and Music. Art collected newspapers and will document the show and performances. Turner hopes this will spur another series of collaborations throughout the semester. Students from dance and music will create improvisations based on the sculptural works. Turner is working with Deborah McLaughlin, associate professor of dance, and choral director, Meredith Bowen, assistant professor of music.

“By far the most influential piece in the storm narrative for me here is that the National Weather Service added three new colors to their precipitation maps due to the amount of rainfall in the Houston area during Harvey,” she mentioned. The only other instance she knows of this happening was in Australia in 2013. The heat index rose higher than ever before in the country’s history, adding new color to the weather maps. Turner integrated these into her works.

“Strange Weather” opens Sept. 29 and runs through Dec. 3. A meet the artist reception and performance starts at 5 p.m., Sept. 29. The exhibit and the reception are free admission. The museum is open Weekdays from 10 a.m. to 5 p.m. and Saturdays from noon to 4 p.m. For more information about the museum, visit www.radford.edu/rumuseum.