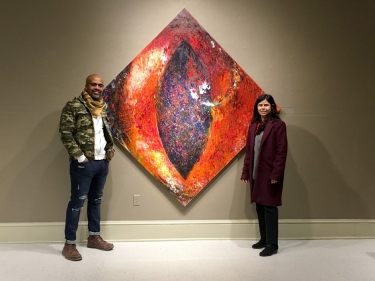 Dr. Halide Salam’s artwork was recently featured as part of a multi-artist exhibition put on by East Tennessee State University’s Slocumb Galleries. “Tangibility of Faith: Beyond the Snake Handlers, Religion in the Arts of Appalachia and Tennessee,” featured 16 artists from the Appalachian region whose works contain religious themes or subject matter. The concept behind the show was to showcase the diverse variety of faiths present among artists operating within the region as a counter toward common stereotypes of Appalachia as being culturally isolated and homogenous. The exhibit ran from January 24 through February 22, 2019 and was featured across two galleries in Johnson City, Tennessee.

Salam showcased four original pieces. The selected works were from her “Homage to the Seven” series, which focuses on prophets from the three major Abrahamic religions of Judaism, Christianity and Islam.

During her time in Tennessee, Salam participated in an interfaith panel discussion about religion and art on January 31. The panel was arranged as part of the exhibit, and featured an interactive talk with religious scholars and artists connected to the show. During the panel, Salam discussed how her art extends her personal connection to nature, as well as her evolving methodologies for creating art. “I wait for inspiration as to the geometric configuration of the canvas. The shape of my canvas is in itself a symbol that will generate the kind of light and texture that will energize the select hue,” said Salam. She went on to explain to the audience the differences between practicing Islam compared to common media stereotypes associated with the religion, and discussed how her personal beliefs influence her work.

While visiting East Tennessee State University, Salam was thrilled to be invited to conduct master critiques with graduate and undergraduate students in ETSU’s fine art program. “It was exhilarating!” said Salam. “This is part of what I do in classrooms at Radford, and to have an opportunity to do it with students at a different university was the icing on the cake!”