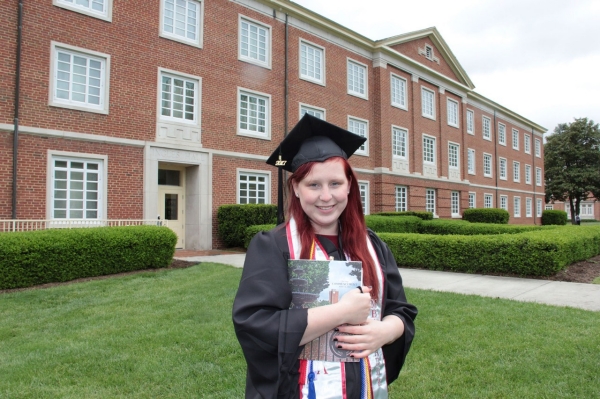 Regan Chancellor during the 2017 Spring Commencement

A few years ago, if you were to visit the Radford University Art Museum at the Covington Center, you might have met a student guide who made customer service an art form. Now a spring 2017 BA graduate, Regan Chancellor, has left a legacy in the College of Visual and Performing Arts.

During her senior year, she made strides both with an academic research project and as the first CVPA Ambassador to graduate from Radford University.

“I have spent my last few semesters getting to know Isabella Stewart Gardner,” Chancellor said. “She is no longer a paper to me. This research has taught me so much about myself and what I can do as an art historian.”

She presented her findings at the university’s Women's History Month Symposium, the Annual Longwood University Undergraduate Medieval Conference, and entered it in the Winesett Awards for Library Research. Originally her paper was about Gardner’s museum and the1990 art heist that happened there, but she found she needed to expand the topic. Chancellor had planned to mainly write about how the theft affected the community. Then her art history professor, Carlee Bradbury, introduced her to Gardner’s eccentricities and adventures.

“This last year she worked tirelessly writing and rewriting her Capstone paper,” Bradbury said. “When she handed in her final version, she brought a binder in which she'd organized each of her earlier drafts and comment sheets. This was not an easy topic yet she never backed down in the face of adversity. I am very confident that we will see Regan do great things in the future - the sky is the limit for her.”

Chancellor’s research started during a class with Bradbury.

“I learned way too much about Isabella Stewart Gardner to only share her museum; so I shared a story of an amazing woman who gave the world the gift of art,” she said. “And in return, Isabella Stewart Gardner had enabled me to become a finalist in the Winesett Awards for Library Research, which let me say that I have written award-winning research.”

And Chancellor found she had something in common with Gardner – a desire to support artists. As an art historian, Chancellor sees herself as a gateway of encouragement for the creative.

“To be an art historian is to be an advocate for the self-expression, creativity and communication of artists present, past and yet to come,” her CVPA Ambassador web bio reads. “I not only study and preserve the arts, I look at a piece of art from the perspective of the artist. Without the art historian, the artists and their work would be forgotten.”

And this fueled her participation with the CVPA Ambassador program. It was a way for her to fulfill her art advocacy ideas. Working with Dana Trask, the CVPA Ambassador adviser, Chancellor became the student founder of the organization. She handled the paperwork to make it a club, wrote the continuation, met with Student Activities, and set up the RU Involved page, along with reserving a Club Fair table for next fall.

“Regan was an instrumental part of creating our inaugural group of CVPA Ambassadors,” Trask said. “She was the first student to submit her application and once accepted her excitement continued to fuel the program. Her work on the organization's constitution and her initial leadership have helped us start traditions for the CVPA Ambassadors that I know will last for years to come. Now she is continuing to blaze trails for us as our first alumnus of the CVPA Ambassadors!”

Chancellor also worked with student artists from the five CVPA departments and enjoyed learning about their artistic focuses.

“With this information, I can better advocate for ALL artist,” she said. “Ambassadors bring the college together and I got to be apart of that.”

Now with her BA in Art, she will start a new job as a guest associate at the Children's Museum of Richmond. She interned there before her sophomore year.

In the future, she plans to go to graduate school and research museum involvement with artists and the communities. Her research of Isabella Stewart Gardner will provide a foundation and a jumping off point into her future life in academia.