Music for a Cause 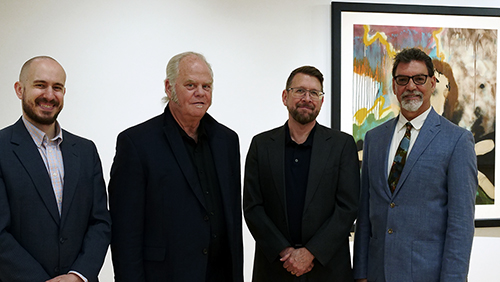 Music regularly echoes within the walls of the First Baptist Church in Radford, but on May 1, a special concert took place. Radford faculty and students marshalled their talents in a benefit for Ukraine that earned over $1900.

“A few of our instrumental performance faculty have been out giving recruitment concerts in high schools and universities around the region this semester,” Cataldi explained, “and Dayl Burnett suggested we bolster that program with student performances and attach it to a good cause.”

“I quickly took the idea to one of the churches in Radford I play for, and the leadership team immediately invited us and helped organize the concert.”

Burnett said the project came together fast but everyone was motivated to help and worked as a team, despite the fact that it happened just a few days before exams began.

“I am very proud of our students who agreed to perform their solos at a very busy part of the semester,” he noted.

One of those students, soprano Savannah Halstead, had personal reasons motivating her participation. Her mother’s side of the family is Ukrainian and the culture, food and traditions of Ukraine have been a part of her life since birth.

“I remember that night I found out that Russia attacked Ukraine,” Halstead recalled.

“It was about three a.m. and my phone was blowing up with headlines about the attack. As the day went on, that was all I could think about.”

Naturally, she felt rather helpless at first but the concert was an opportunity to use her musical talent to contribute to aiding the cause.

“Using my gift of music for the help of my people seems like the most I can do currently,” Halstead said, noting the struggle Ukraine has faced since attaining independence in 1991.

“We will continue to fight for everything that we made--our culture, people, and our country.”

Trombonist Michael Magnum did not have the personal connection to Ukraine but was eager to join the cause.

"I participated in the benefit concert just to help out,” he said. “I had no idea how I could make a difference prior to this and was thrilled to make a change for the better."

In total, six students and four Radford University faculty performed. The concert was free and open to the public with audience donations of cash, checks and online contributions going to Care.org, raising a final total of $1922.50.

This marks the second time in three months that Radford Music Department faculty have participated in a Ukraine relief benefit. In early March, a scheduled performance with the NOVA Alexandria Band became an impromptu benefit just a few days after the war began.