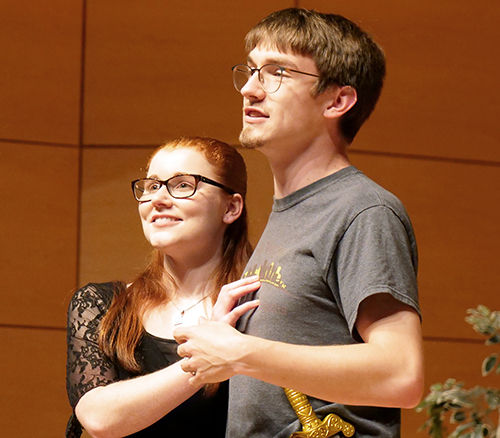 Grace Pfleger and Grant McDonel rehearse their roles as Venus and Adonis.

Opera is alive and well at Radford University with the Music Department’s production of Venus and Adonis, the oldest known English language opera. It presents the story of the Goddess of Love who is accidentally struck by Cupid’s arrow just before coming upon Adonis, a hunter.

The opera is directed by Dr. Denise Bernardini, who has staged operas for more than 15 years. She said that Venus and Adonis made a good choice this year because it was neither too long nor too difficult and fit in well with other music programing this semester.

The composition was penned by John Blow in 1683 in the middle of the Baroque period in European art, literature and music. It’s art and architecture were highly ornate and focused frequently on classical mythology.

“Composers, painters, ballets, and storytellers during this time used Greek mythology to enlighten people and give them moral tales to think about,” Bernardini explained.

Capturing this time and its spirit requires attention to detail. For example, modern gestures like pointing fingers or putting hands on hips must be transformed into 17th Century norms.

“Women especially were to keep their hands down and close to their body,” said Bernadini, who watches carefully to keep the performers focused as they rehearse to ensure authenticity.

Simultaneously musical director Amanda Raymond guides the singers in their understanding of the music, lyrics, and character in a style that’s different from what most people think of as opera. 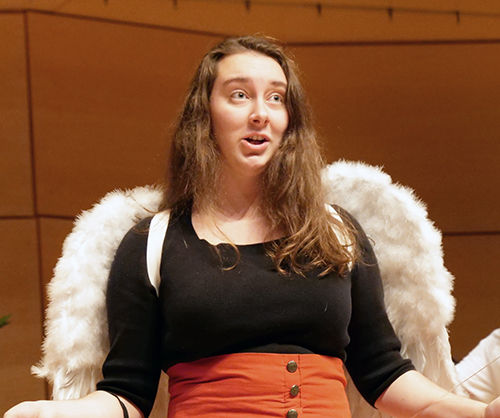 “In this opera you'll hear segments of music where characters sing by themselves accompanied by harpsichord and cello and also chorus parts joined by the string quartet,” Raymond said.

“The more one embraces the uniqueness of the style the more enjoyable it is.”

The production is choreographed by Lezle Renee Pfleger who is getting to work with her daughter, Grace Pfleger, a graduate student in Music Therapy.

Grace Pfleger, who plays Venus, explained that the production is part of a semester long preparation in the university’s Opera Workshop class. This is her third year in the workshop which she says helped prepare for the rigors of this performance.

“The emotional and musical vulnerability this role requires has been really challenging,” Pfleger said. “It is scary to allow myself to feel such intense feelings on stage and to portray them professionally with my voice.”

Her stage partner, Grant McDonel, is a senior who minors in music while studying cybersecurity.

He said figuring out the right character chemistry on stage has been something they have been working on since August.

“Learning to sing and act in the Baroque style has been a unique challenge,” McDonel says, “but one that I have enjoyed very much.” 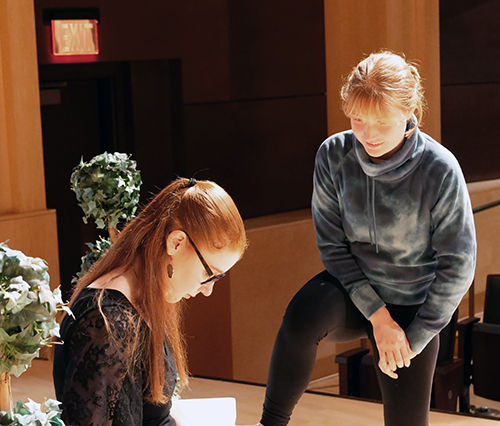 In addition to the title roles, Ryan Bennett and Cierra Bird play a shepherd and a shepherdess. Patrick Hart and Dylan Jones play huntsmen.

It’s Merriman’s arrow that strikes Venus and sets the plot in motion. A sophomore in both Theater and Music, Merriman says the part is energetic and she’s having fun playing a supernatural child.

Merriman played a rather flamboyant former showgirl in last year’s comedic musical, The Drowsy Chaperone, and says that while the characters were written approximately 400 years apart, there is an important similarity.

“The vocal style of the opera is completely opposite,” she said, “but the presentational acting is quite similar. Baroque acting faces almost entirely towards the audience, ‘presenting’ the show to them.”

Venus and Adonis is just one of several events to explore and celebrate Baroque music during the coming week and all are free and open to the public.

Dr. Meredith Bowen will direct a choral concert of Baroque works on November 9 and Amanda Raymond will present a Baroque music recital with guest artists from Virginia Tech on November 12. Both are at 7:30 pm in the Davis Performance Hall in the Covington Center on Radford’s main campus.

The first performance of the opera will take place between these two events on November 11 at the same time and location. There will be a matinee as well on Sunday, November 13 at 2 pm.