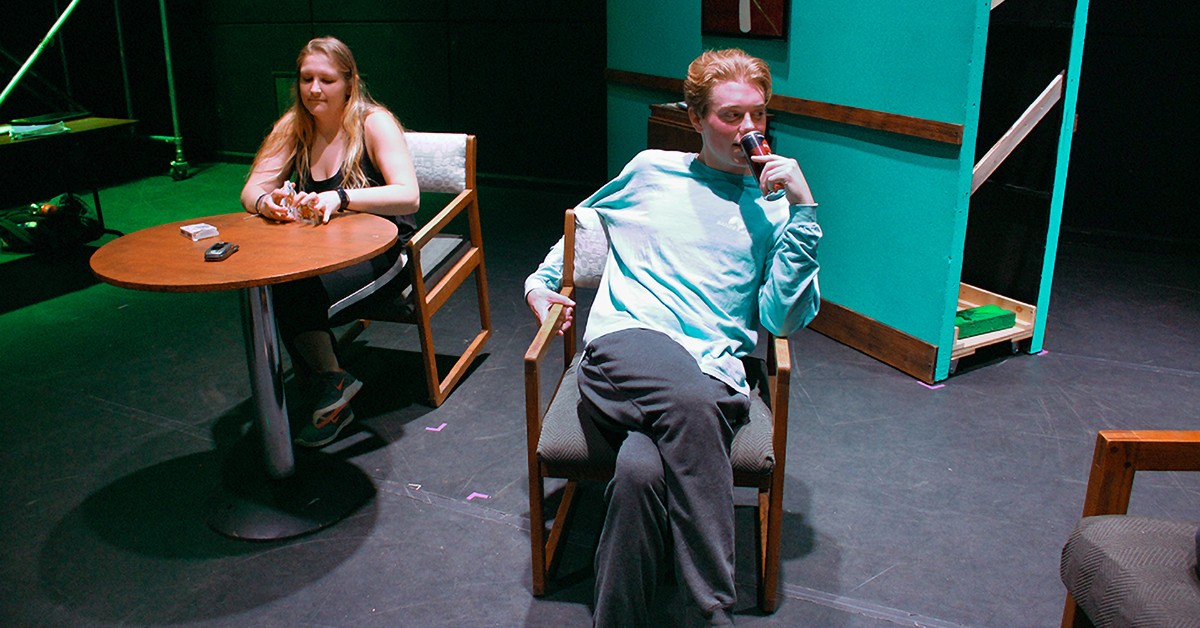 Holly, played by Senior Theatre Major Shaly Farmer, and Luke, played by Junior Jason Viers, share a ruminative moment in a scene from “Next Fall” by Geoffrey Nauffts. The contemporary family drama opens February 12 in the Hawes Studio Theatre.

For many college students, winter break is a time to cast aside schoolwork in order to take a breather before returning for the spring term. However, several Radford University theatre students spent their winter break memorizing lines, refining designs, and otherwise preparing for the production of “Next Fall” that will open in Hawes Studio Theatre on Wednesday, February 12, 2020 at 7:30 p.m..

“Next Fall” by Geoffrey Nauffts follows Adam, Luke, Arlene and Butch who, when faced with a horrific accident, find themselves in prickly emotional territory where faith, commitment, and unconditional love merge amid a turbulent setting. This timely and provocative play, hailed by critics as “deeply moving and surprisingly funny,” highlights the preciousness of life with wit and tenderness.

The play’s director, junior theatre major Travis Sykes, describes the play as timeless because of its emphasis on the themes of homosexuality and religion. Sykes said that as much as it hurts, even 500 years from now we’ll still, perhaps, need this play as a reminder.

“Especially in today’s climate, like with Tennessee not allowing gay couples to adopt anymore, when we’re still heading in such a negative direction, it’s needed,” Sykes said.

This production of “Next Fall” is Sykes’ directing debut in the regular season of the Department of Theatre. The theatre faculty selected a play they felt Sykes could connect with. According to Sykes, he isn’t the only one connecting with the play and its characters. Sykes says that before they had even auditioned, he already had ideas about which actors in the department might be perfect for which roles. “This play highlights each character in different scenes,” he said. “There’s elements in all of them that make each actor perfect for their character.”

One of the leading actors in the play, Camden Ferris, said that it took him a while to find out how to personify his character, Adam. The senior theatre performance major said that he could tell from the script that Adam was very sarcastic, but he wanted to add more nuance to the character. “I wanted to show that he can be caring and attentive, while also showing that he is willing to fight for what he believes in,” Ferris said.

According to Ferris, he was able to achieve this by playing around with his lines, playing off the other actors onstage and by working with the director. Ferris says that Sykes is a great director because he knows what he wants to bring to the table and he’s willing to listen to his actors offer solutions to creative challenges.

“Everyone thinks that directing is just bossing everybody around and telling them what to do, but I don't really think that's what it is,” Sykes said. He feels that directing is more like a compromise and includes working closely with cast and crew to ensure the production does justice to the playwright’s vision. “I feel like my biggest job as a director is giving feedback as an audience member and then opinions on how to improve,” Sykes said.

As upperclassmen, both Ferris and Sykes said that they have learned and grown a lot during their studies in the Department of Theatre and Cinema. Sykes said that Radford made him realize that there is more to theatre than just acting. Recently, he’s been exploring directing and costume design.

Ferris, on the other hand, has learned how to perfect his acting craft and how to memorize his lines easier. He also learned how to communicate more effectively with the cast and crew. “It's okay to play around in the rehearsal room, talk to your director and bring up ideas to try,” Ferris said.

The production of “Next Fall” will take place on February 12-15 at 7:30 p.m. and at 2 p.m. on February 16, 2020. Admission is free, but tickets are required to reserve seating. Free tickets can be obtained by visiting www.rutheatretickets.com