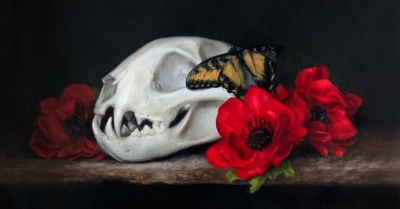 Five students in the College of Visual and Performing Arts will have their artwork featured in an upcoming exhibit at the Floyd Center for the Arts titled “New Voice.” Zach Blevins, Alexandra Leonetti, Isabella Linkous, Kevin Wayne Meredith and Jack Miles will each have artwork on display in the show. The students’ works represent a variety of creative subjects and media, including photography, oil painting, ceramics, and mixed media sculpture.

Master of Fine Arts student Alexandra Leonetti will have nine paintings featured in the show. Each piece is her preferred medium of oil on canvas, with an emphasis on still lifes, portraits and pet portraits. “This is the style I studied extensively while I was living in Florence, Italy for two years prior to moving to Virginia in April 2020,” says Leonetti. The talented painter recently won the Grand Prize Purchase Award for her painting, “Still Life with Lemons” in the Super Duper Student Show. Leonetti says that she feels blessed that her works are receiving recognition and she is excited about what the rest of 2021 has in store for her. 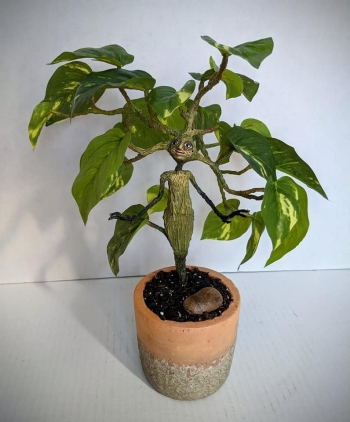 Zach Blevins, an undergraduate senior majoring in art, will be exhibiting several pieces of mixed media 3D sculpture. His works are created with floral wire, clay, adhesives and plastic, but he jokes that there is a bit of magic involved too. “My inspiration for the art I create comes from a love of plants, trees, and nature in general. I loved being in the woods as a child and grew up climbing trees all the time.” says Blevins. He finds connections between the various shapes and sizes of both trees and humans and enjoys combining physical features to create personalities in his artwork.

Fellow art senior Isabella Linkous will also be featuring nature-themed sculptural works, though her works use differing materials in an altogether different style. She says her love of the subject matter goes back to her childhood. “I used to catch insects and study plants, noting their colors and textures. This was a huge part of how I experienced the world around me, and it was important that I incorporated these elements into my work,” says Linkous. She says that it is important that her works have a tactile dimension as she wants her art to be both seen and touched. “I wanted to recreate the child-like wonder at ordinary things which kept me occupied as a child in rural Virginia.” 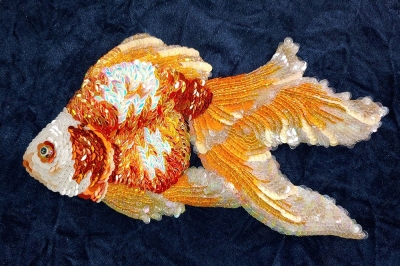 An embroidered fish design created with sequins by Kevin Meredith

Kevin Meredith is a junior majoring in fashion design in the Department of Design, but he likes to keep busy making fine art as well. He created a series of handmade embroidered designs that were accepted for display in the show. He will also be showing several original ceramic vases that he crafted. Meredith says that much of his work is inspired by his love of the ocean and aquatic creatures.

Art senior Jack Miles will be exhibiting digital photography titled “Home on the Little River.” He says his inspiration for creating the works stemmed from a desire to understand his great grandfather, whom he never had the chance to meet. Miles created the pieces by building archives of his great grandfather’s belongings, then taking a series of photographs of projected images on his home. The frames used to house the developed images were made by Miles using pieces of a bookshelf crafted by his great grandfather.

“New Voice” will be on display from February 13 through April 3, 2021 at The Hayloft Gallery at the Floyd Center for the Arts.