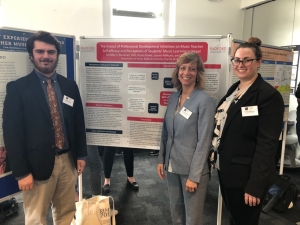 Students Bryan Dowd (left) and Lauren Milburn (right) with Dr. Jennifer McDonel (center) at the RiME Conference in the UK

Dr. Jennifer McDonel and her students Bryan Dowd and Lauren Milburn traveled to the United Kingdom at the close of April to present research conducted in Nepal. The group’s session titled “The Impact of Professional Development Initiatives on Music Teacher Self-efficacy and Perceptions of Students' Music Learning in Nepal” was presented at the Research in Music Education (RiME) Conference at Bath Spa University in Bath, UK on April 24, 2019.

“This is part of the continuing work I am doing in Nepal bringing music education workshops for music teachers there and doing research to investigate its implementation,” said McDonel.

Dowd, a sophomore music education major, was in the inaugural class of ‘Research Rookies’—President Hemphill’s initiative to encourage undergraduate research. Milburn is a graduate music education student who also journeyed to Nepal this past January. 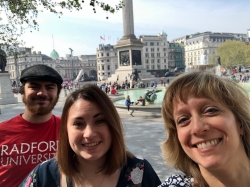 Dowd, Milburn, and McDonel pose for a snapshot while in the UK

Dowd received funds from the Office of Undergraduate Research and Scholarships, while Milburn received support from the graduate college. Professor McDonel received funds from a College of Visual and Performing Arts research grant to travel and present findings at the RiME conference, a biannual event that showcases music education research from around the world.

The group presented qualitative research on the impact of teacher development workshops on music learning theory conducted in 2016 and 2017. The research team investigated to determine if those workshops impacted teacher self-efficacy or perceptions of student learning. The research was conducted in Nepal, where there is a severe inequity between students who attend private schools and those who attend government schools. Their findings suggest that the workshops helped to increase teacher self-efficacy and student engagement, and that internet technologies have opened access to western music in Nepal and offer potential  for changes in music education in Nepal.