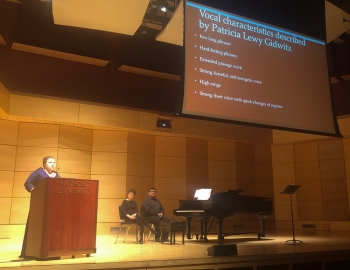 Dr. Marlayna Maynard, voice instructor with the Department of Music, held a faculty lecture recital on works composed for classical singer Catarina Cavalieri at the Davis Performance Hall in the Covington Center on February 7, 2019. The performance included a half hour of lecture followed by a performance of arias by Wolfgang Amadeus Mozart and Antonio Salieri. Maynard, who performed vocals, was accompanied by pianist Cara Ellen Modisett.

The duo presented music originally performed by Cavalieri (1755-1801), who was a soprano soloist of the classical period. Maynard said her interest in the classical singer began when she was doing research on Antonio Salieri (1750- 1825), an Italian composer who worked closely with Cavalieri.

“It was practical for me to base my lecture recital on Cavalieri because I already sing a lot of arias that were written for her, and I thought it would be interesting to share the research I’ve done on her,” said Maynard.

According to Maynard, Cavalieri lived her entire life in Vienna but sang in the Italian style. “She sang Italian and German operas, and even changed her name to Italian,” said Maynard.

Along with Antonio Salieri, Cavalieri also frequently worked with Wolfgang Amadeus Mozart (1756-1791). Salieri and Mozart each wrote music specifically for Catarina because of her unique vocal characteristics, including her vocal agility, stamina, ability to reach strong low notes, and a high vocal range. “I really wanted to talk about how composers and singers worked together to create music from the eighteenth century because it was different than it is now,” said Maynard.

Modisett, who is a staff collaborative pianist with the Department of Music, says that she enjoys her work as a collaborative pianist because she loves performing with other musicians. She was excited to be a part of this event, as it was her first time accompanying a lecture recital. “Marlayna is such a good scholar and so excited about the topic that she’s been researching, so I’m excited to hear the lecture part of it,” said Modisett.