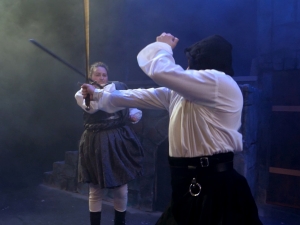 Students, faculty and staff in the School of Dance and Theatre are busy preparing for the opening of “The Tragedy of Macbeth,” which will hit the stage of Pridemore Playhouse beginning April 16, 2019. The play’s director, Assistant Professor of Theatre Molly Hood, says that audiences can expect an exciting and cautionary tale about the choices we make in life, chock-full of witches, swordfights, and, of course, Shakespeare’s glorious language.

Hood, who holds an M.F.A. in Classical Acting, is an expert on Shakespeare, so she was elated at the opportunity to helm the production. “Shakespeare can see right into the heart of the human animal,” says Hood. “His works, and ‘Macbeth’ in particular, challenge performers to be at the top of their game. Shakespeare is the Olympics of acting, and the demand on the actor’s instrument is absolute. Working on this production has been incredible because it is pushing our students to be at the top of their game, and I am so proud of them.”

"The Tragedy of Macbeth" Promo 1: Bells

The department brought in two guest artists to assist with the production, giving students unique opportunities to learn from professionals in the field. Rafael Untalan is a Washington D.C.-based actor, and member of Actor’s Equity and SAG-AFTRA. He is portraying the role of King Duncan and also serving as a text coach for the production. Untalan holds an M.F.A. in Classical Acting from The Shakespeare Theatre Company Academy for Classical Acting at George Washington University, and has been seen onstage at Virginia Repertory Theatre, Arena Stage and The Oregon Shakespeare Festival, where he was a company member.

The production also recruited fight choreographer and Radford University theatre alumnus Robb Hunter (’91). Hunter is a Fight Director and Movement Choreographer based in Washington D.C. He is a member of SDC, AEA and SAG/AFTRA and is a Certified Teacher, Fight Director and Theatrical Firearms Instructor for the Society of American Fight Directors. Robb has choreographed for The Shakespeare Theatre, The Kennedy Center, Washington National Opera, and Arena Stage among others. He is currently the Combat Instructor for The Shakespeare Theatre’s MFA program and Fight Choreographer in Residence at American University. He is also the founder of the theatrical prop weapon company, Preferred Arms, Inc. Hunter has been working with Radford students since February teaching fight choreography for the production. He worked with students on eight fight sequences in the show that will utilize a combination of bladed weapons, shields and hand-to-hand combat.

Student response to Hunter and Untalan’s participation in the production has been overwhelmingly positive. Megan Ward, who portrays Lady Macduff in the play, enjoyed working with the stage combat expert. “I thought working with Robb was a wonderful experience. I’ve never worked with weapons in stage combat. It was great to learn how to parry, avoid, and hold the weapons correctly,” said Ward. Drew Callahan, who plays Macbeth, was equally excited about his experience learning to interpret Shakespeare’s complex dialogue. “Working with Rafael has truly been a privilege,” said Callahan. “His insight into the inner workings of the text has been incredibly valuable for this production. He is incredibly patient and outgoing, and working with him has been a joy.”

The cast and crew of “Macbeth” have also created a unique seating area where a small number of thrill-seeking audience members can be right in the middle of the action. The seating arrangement is a throwback to Shakespeare’s original playhouse, The Globe, where audience members were able to pay a penny to stand in the pit and experience the performance up close.

The spring 2019 production of “The Tragedy of Macbeth” will grace the stage of Pridemore Playhouse for five dates starting April 16, 2019. For tickets and showtimes, call 540-831-5289 or visit https://rutheatretickets.universitytickets.com/w/default.aspx