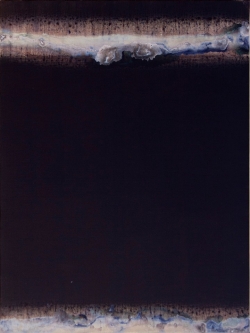 Radford artist and instructor in the Department of Art, Shaun C. Whiteside, was awarded Best in Show at the Academy Center for the Arts' 2019 National Juried Art Exhibition. Kaitlyn Houston, a senior Bachelor of Fine Arts student in the art program, took second place. Artist Joan Huiner Ranzini juried the show and presented awards to the artists during the exhibit’s opening reception in Lynchburg, Virginia on April 5, 2019. The exhibit featured 49 artists spanning twelve states.

Whiteside’s award was presented for both of his entries, “Fascism I” and “Autoportrait.” According to Whiteside, “Autoportrait” was inspired by his readings on automatism, which he describes as a surrealist method of working without prejudicial decision-making. “The title refers not only to the French translation of ‘self portrait,’ but also to the spontaneous way in which I painted it,” said Whiteside. His second work, “Fascism I,” reflects his ongoing pessimism with the state of American politics and its inadequacy to develop solutions that match the scope of the problems facing the nation. “This work overall largely features dark, muted colors to reflect these pessimistic themes,” said Whiteside.

Whiteside works with acrylic paint in a style most influenced by Abstract Expressionism, with an emphasis on the metaphysical and emotional realm, rather than on optical reality. Using layers of thin glazes, partially washed away, he creates oppressively dense atmospheric environments, with organic, liquid shapes within them. 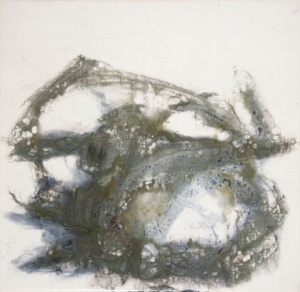 Whiteside graduated with a Bachelor of Arts degree from Christopher Newport University in 2007 and received a Master of Fine Arts from Radford University in 2011 where he studied under Dr. Halide Salam. He has gone on to win numerous awards and his works have been published in several periodicals, including the “International Painting Annual.”

Kaitlyn Houston, a graduating senior in the Department of Art, submitted two pieces to the exhibit titled “To the Left” and “To the Right.” Each work is a diptych that was created as part of her senior studies in the program. The works took second place in the show. “I was very excited to get the chance to participate in the show. It was an honor just to be selected,” said Houston, who admitted that she was surprised when she found out that she placed in the juried exhibition.

The Academy Center of the Arts is Lynchburg’s center for arts, culture, and community building. Their mission is to serve the community through arts and culture. Each year, the academy engages tens of thousands of Central Virginians through stage events, arts education, facilities rentals, outreach, and galleries exhibits, which result in a significant economic impact on the Greater Lynchburg area. 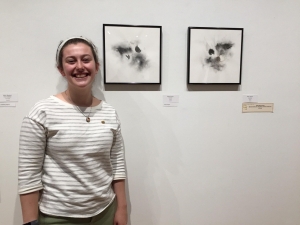