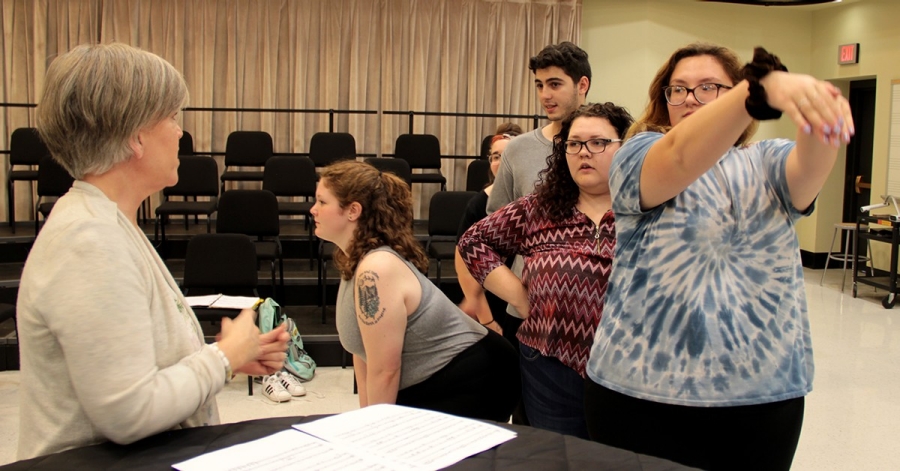 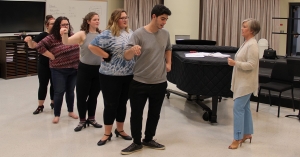 According to Bernardini, “La Bonne Cuisine” translates to ‘the good food’ in French and is her way of connecting two of her passions. “In many countries, music and food go hand and hand,” she said. “Music is life, and so is food.”

“I really like the theme because it’s not something you see often, especially in vocal music, so I think it’s going to be really fun,” said Nichole Wright, who is a junior in the opera workshop course. She says that her favorite part about preparing for the performance has been getting to know her classmates as well as Bernardini, who began teaching at Radford University as an Assistant Professor of Music this fall. “It’s kind of tough sometimes being only five people, but on the other hand, you get to know everyone really well and make connections that you don’t get in other classes,” says Wright.

According to Bernardini one of the hardest parts of getting the performance together is finding time to perfect the choreography because students may work or have other performance-based classes. “They’re not just singing about food. It’s lots of dancing and singing,” said Bernardini.

One new challenge that the course is introducing to students is learning to incorporate choreography into vocal performance. “Suddenly having to sing and dance, putting hands and feet to it as well, makes it a challenge,” said Bernardini. Students in the course have been routinely practicing in preparation for their November performance.

The event will mainly focus on pop and new music, with both group and solo performances by the students.

Angelo Cline, another junior in Bernardini’s class, said that this is the most fun he’s ever had in choir. He admits that his biggest fear is missing one of his steps. “I’m more worried about the choreography than the words,” Cline said.

Junior Maggie Doherty says that everyone in the ensemble is very supportive. “We’re all very encouraging of every other student and it’s very nice,” she said.

Dr. Bernardini is excited to be able to offer a fun show for students and the community alike. “They are really, really talented students,” says Dr. Bernardini. “Come learn something new!”

Tickets will $20 for the general public and $10 for faculty, staff and students with an RU ID. Visit radfordactivities.com three weeks prior to the event for ticket purchases. The performance will be held in the Scartelli Altrium in the Covington Center at 7:00 p.m. on November 15, 2019.