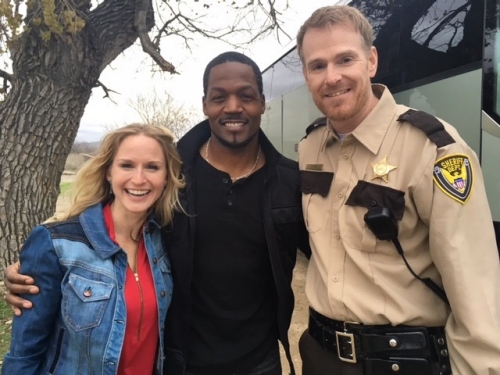 On the set of "My Daddy's in Heaven," Jenn Gotzon Chandler, T.C. Stallings and Jim Chandler take a photo break. Photo courtesy of Jim Chandler

Jim Chandler may be enthusiastic about drama, but he is passionate about uplifting others through his work. Once a theatre student at Radford University in the late 1990s, his educational path helped him realize his dream of becoming an actor and led him to discover something greater.

While at Radford, Chandler felt the familiar pull of academics, the singular focus of wanting to act, and to maintain a social life. He enjoyed the times when he fully engaged on the main stage and other theatre productions, and appreciated the witticisms of Chuck Hayes, now professor emeritus.

Before this, Chandler lived with his family in Northern Virginia. He developed his love of the theatre at a young age when he first appeared in a musical produced at a local theatre. The stage became his passion and throughout his primary school years he was in several more productions.

When it came time for him to attend college, his choice was between Virginia Commonwealth University and Radford University. After auditioning for both, Radford accepted him. Though he struggled with the rigors of college life, he found great support from the theatre faculty when he applied himself. Now he looks back on his time at the university with fondness because the faculty encouraged him to follow his aspirations.

And they challenged him, forcing him to learn an important lesson.

“In acting, it’s OK to be available and allow others to compliment you, and accept those compliments with humility,” Chandler said.

And this helped lead him to what he considers one of his greatest successes in both career and life. After leaving Radford and going through a dark period, he found his confidence and his faith. With his new belief in a higher power, he put his life in order and focused on his theatre skills.

Then he discovered a niche where he now thrives. This is the faith and family television and movie market, which he found while researching the theatre industry. Since his faith was important to him, he looked for projects that were not only uplifting but showed a positive worldview. His theatrical desire goes beyond just portraying a role; he wants to impact the viewers.

So he navigated through the market to find stories that resonated with him. Working with an agent, he got his start in the faith and family market through an independent movie producer during the beginning stages of a project, and three years landed had a role in that production.

“If you seek it out, you will definitely find it,” he said in terms of following his interest.

Now he finds many roles in the faith and family market through networking. A connection recommends him for a project and he follows up by sending examples of his work, known as a demo reel.

This is how he landed one of his latest roles in “My Daddy’s in Heaven,” produced by Nasser Entertainment and which will be available later in the year. This is the story of a woman, Becca, who faced the tragedy of losing her husband. Unable to cope, her father looked after her daughter while Becca journeyed through rough times and self-destructive tendencies to find peace again.

Chandler’s wife, Jenn Gotzon Chandler, is the lead actress in the movie and the person who asked the producers if there were any roles available that would fit her husband. There was a small part toward the end of the movie and they cast him as Nick, a police officer who helped Becca understand that she could unburden herself from the weight of her loss.

This movie is one of many examples of the newly married couple’s work together. Their projects include several television pilots and five feature films. In three they play the romantic leads.

Their chemistry is visible in the recent Lionsgate release of “Saving Faith,” which came out in 2017. Gotzon Chandler plays a woman on a mission to save a small town theatre and she enlists the help of those closest to her, along with a few famous friends. And she discovers love with Chandler’s character.

Together they want to be part of an industry that is wholesome and inspirational.

“Our goal is to develop branding for us in that market (faith) as a husband and wife on screen, or to be paired together in films as a packaged unit,” Chandler said. “This isn’t necessarily a normal thing for different areas of filmmaking, but for this little niche we think it is a definite possibility that we could find steady work and be able to tell some interesting, uplifting stories.”

One such story is their upcoming self-produced movie “The Famer and the Belle.” He plays the farmer, and Gotzon Chandler, the belle, a supermodel. And as one imagines, true love sparks in the most unexpected places, a pig farm.

The couple plans to film in Georgia in November but shot a few scenes in December 2016 in the Flat Iron District of Manhattan. One involved a horse in a pink onesie and his wife in a matching one with stars.

Other roles Chandler pursues are in the more mainstream film and television markets. For these, he follows the traditional route of auditioning.

These efforts include a series airing Oct. 27 on Netflix, which must stay unnamed in this story due to Chandler’s contractual obligations. In the second season of this popular show, he has a small speaking role. He spent two days on the set in Atlanta during its filming.

“I am very thankful to have had a principal role on a show of that magnitude and I am all about celebrating it and being able to represent Radford as a former student to having made it onto a show of that caliber,” he said paying homage to the department that encouraged him to go forward with his career. But his faith helps him keep his momentum.

Since then, Chandler recently finished a lead role in “A Crime to Remember,” the Investigation Discovery Network’s Emmy award-winning show. He is also working on AMC’s new program “Lodge 49.”

For those in the Roanoke area, during the Oct. 7 Point North † Media Convention in Roanoke, the featured guests include both Chandlers. This is a film festival with a western theme. Point North † Media is the publisher of Point North † Tidings Magazine, a publication dedicated to Christian film and television stars and their many fans. Visit http://www.pointingnorth.com/pointnorth/ for more information.