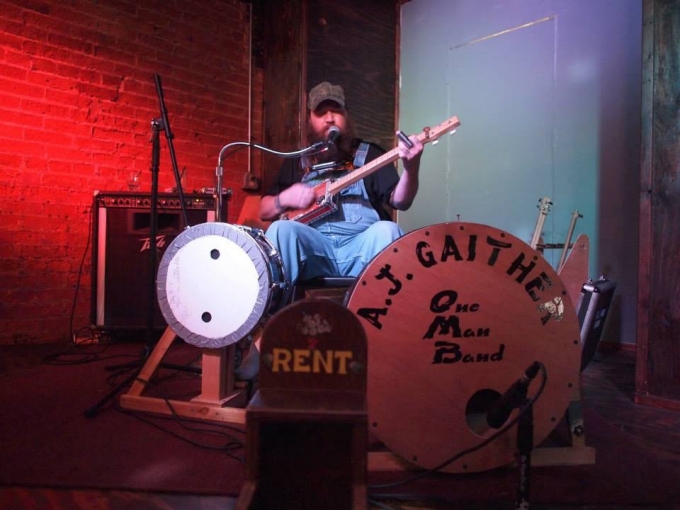 Old cigar boxes, scrap lumber, spare bolts, and four strings make the bodies of A.J. Gaither’s homemade guitars. He brings these and his unique one-man band along with the Java Brothers March 31 to Radford University.

Richard Bay, professor of art education, in a mission to bring the Roots Movement to the university, is organizing the concert.

“Roots is a need fulfilled through some method of creating,” Bay said. “It fills what is missing or answers those questions we can’t find answers for! All these names and even more: Outsider, Untrained, Roots, Homegrown, all are the same genre.”

Originally from Locust Bayou, Arkansas, he grew up listening to his grandmother’s 8-track tapes of Willie Nelson and Johnny Cash. At night, his grandmother sang him gospel songs.

“When I decided I was going to give a real go at playing music, it was the things that I remembered from my youth that built the foundation.”

For the past five year’s Gaither has made his own instruments. He started by making a string bucket bass, which he played for almost two years in his first band. Going solo, he kept the DIY instrument theme.

“I just remember reading about folks like Muddy Waters, Bo Diddly, Doc Watson and others who learned basic music as children on home built things like cigar box guitars and cat skin banjos … I thought what if a guy just kept playing rudimentary instruments? How far could he take it and still be simple, homemade?” he said.

This is his challenge. He sets limits on cost and materials, preferring to keep his instruments inexpensive while maintaining a quality sound in concert environments.

But the bigger challenge is being in a one-man band and traveling alone. He does everything from building the instruments, songwriting, booking concerts, performing, and acting as his own agent, roadie and mechanic.

The Java Brothers open for him. Their genre is Bluegrass. Performers include Joe Abercrombie (banjo), Ralph Berrier (fiddle), Chris Burgoyne (mandolin), Doug Capobianco (string bass), and Wayne Frye (guitar). The group does all its own vocals.

They originally met at the Radford Fiddle and Banjo Jam, which met at a local coffee shop where musicians were encouraged to bring their instruments and share their passion for playing Bluegrass. This tradition continues at River City Grill Monday nights.

A Night of Roots Music with The Java Brothers and Special Guest A.J. Gaither’s “Homemade – One-Man Band” starts at 7:30 p.m., March 31 at the Performance Hall in the Covington Center.

This event is sponsored by the RU Art Education Club in conjunction with the College of Visual and Performing Arts, Appalachian Studies, and the Scholar Citizen Initiative.

Admission is free with the donation of nonperishable food items. These benefit the New River Valley food banks.