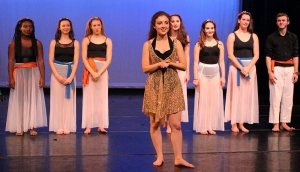 Senior dance major Fiona Scruggs recently completed a lengthy honors capstone project on Josephine Baker, the famous cabaret dancer of the 1930s. Her project culminated in a choreographed dance performance which took place on the evening of October 25, 2018 in Albig Studio in Peters Hall. Over a year in the making, her research took her to France last summer, where she visited various historic landmarks associated with the famous dance icon.

Her research spawned from a fascination with Baker’s life that started in a dance history class here at Radford University. During her research she came across Baker’s home, Chateau de Milandes, and thought that she would like to visit it someday. “I couldn’t let go of that idea,” said Scruggs. 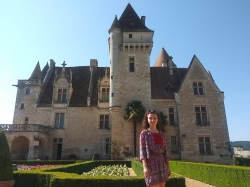 Scruggs poses in front of Josephine Baker's chateau in France

After bringing the matter up with her mentor, Professor Deborah McLaughlin of the Department of Dance, they began talking with several offices on campus to find ways to fund her research on Baker and allow her to see the famous starlet’s homeplace. Scruggs applied for and received a Summer Undergraduate Research Fellowship scholarship from the Office of Undergraduate Research and Scholarship, a Scholar-Citizen in Action Grant from the Scholar-Citizen Initiative, and a McGlothin Student Study Abroad Award from the International Education Center.

While in France, Scruggs was able to visit numerous places associated with Baker. She spent time at her homeplace, where a portion of the estate has been turned into a museum dedicated to the star’s life. “The rooms are very similar to how it was set up when she was living there,” said Scruggs. “The first room is filled with costumes that she wore, including her famous banana belt skirt, which is one the more iconic pieces. It was cool to see it. It is one of the costume items that made her famous.” 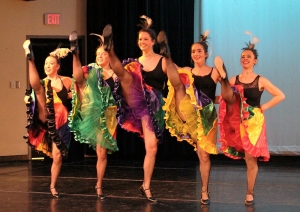 Sections of the museum are dedicated to her participation in the French resistance in World War II, highlighting her espionage work against the Nazi regime. Other parts of the museum showcase Baker’s role as a civil rights activist as well as books that she wrote and published. “There are gardens and a waterfall that comes down the hill at Baker’s chateau. It is a beautiful view in that area of France with tons of castles everywhere,” said Scruggs.

Scruggs also spent time in the Montmartre district of Paris, where the cabaret scene thrived during Baker’s early career. While there she visited the Museum of Montmartre, which helped Scruggs to better understand the culture of that time period.

Scruggs returned home with a wealth of knowledge and ideas about Baker that she wanted to incorporate into a tribute to the star’s life. As she began developing the dance, Scrugg’s choreography was inspired not only by Baker’s life, but her own experiences while in France. Ultimately, her choreographed piece involved ten costumed dancers who helped to realize her vision. “The eight main dancers are freshman. The other two doing transition work; one is a junior and the other is a senior. I’m lucky to have them be part of this, and I’m very thankful for them,” said Scruggs.

“It really has been a year in the making in terms of gathering information and planning to create this show,” said Scruggs. “I’m excited to see everything come together, and for the audience to be able to experience the same or similar things that I’ve been able to experience.”

To conclude the performance, Scruggs performed a solo piece which recapped her experience while working on the project. Once the performance was finished, she held a question and answer session with the audience.

After graduation, Scruggs plans to go to graduate school to earn a doctorate in dance history or art history. She says that she would love to continue her research on Josephine Baker. “It would be nice to write a book about her,” she said. “Part of the reason I’m so drawn to her is that she’s a complex person. She wasn’t just one thing. She was a mother, a performer, an author, a spy, and so on.” Over time, Scruggs hopes to evolve her show to make it accessible to larger audiences. She believes that there is a lot that people can learn from Baker’s life.