If you’ve walked into a stunning hotel lobby or cozy high-end restaurant, you’ve experienced the work of an interior designer.

Students in Radford University’s Interior Design program certainly learn to do that, but Professor Joan Dickinson makes sure her Design 205 students face practical, down to earth problems that can open students’ eyes as well as develop their skills.

This term, they are tackling homelessness.

“I want them to know that designers can help solve the problems facing this country,” said Professor Joan Dickinson emphatically. “They can use what they learn to make a difference and improve social justice.”

It’s a profound challenge. Since 2016, homelessness in the United States has steadily increased annually and tent cities are popping up across the country.

Moreover, stereotypes don’t always apply. Many unsheltered people have families, maintain some form of employment and are neither addicts nor mentally ill.

To engage the assignment, students first researched the problem and developed profiles of unsheltered people in three states where tent cities are emerging and expanding—Hawaii, Washington, and Michigan.

Next, they organized their ideas in process packets before designing and modeling prototypes. Then, they assembled a life-size working example to display on Radford’s campus for other students to investigate and test.

In the process, they were directed to utilize resources that might reasonably be available to a person struggling to shelter themselves, especially scrap materials and inexpensive items attainable at thrift stores.

“What I have encouraged them to do is be creative about material usage,” Dickinson said. “They have done some information gathering to understand thermal properties, resistance to water, and stability.”

Lora Ellen Robinson’s group created a profile of a college student struggling in Michigan, a more common situation than one might think. According to a survey of 167,000 college students by The Hope Center in 2019, 16% of students at four-year colleges were homeless with many more in insecure housing situations.

Robinson said the final design offered more than one advantage.

“We gave it a domed top to provide a sense of comfort,” she said. “The top was also rounded off so that way whenever snow and rain would pile up on it, it would just fall off.” 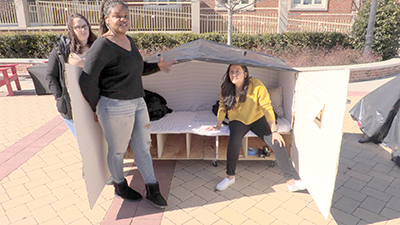 Ayah Elalfy’s group profiled a Hawaiian man with a job but unable to afford housing in one of America’s most expensive states. They created a small rolling house that provides storage space, but still puts a premium on mobility.

The team ran into several problems with the original design and had to restructure everything. Then, their handle design failed before the project was due, but they quickly devised a pull cord with flexible foam wrapping for a handle that did the trick.

“One thing about design,” she said, “and what we love about it, is if you run into a problem, you have to come up with a solution.”

“It makes your mind work quicker but you have to put the hard work into it.”

Samantha Wood said her group had a very similar experience.

“I think the biggest thing we learned is that your first design is not going to work out,” she reflected. “Our first design was so different from our final product.”

“People often opt out of going to an actual homeless shelter,” she said, noting that factors like single gender facilities, restricted hours or issues with pets make them undesirable.

Her group profiled a Seattle high-school student with a poor parental relationship trying to graduate and work to maintain independence.

“I know a lot of people don’t have the greatest household situations,” she said. “It made me really appreciate that I have a good relationship with my parents and that I have a roof over my head.”

When completed, the teams brought their prototypes out for public inspection on Radford’s campus as part of a fund raiser for To Our House, a group providing winter shelter in the New River Valley. The students raised over $500 in a little over an hour.

The semester’s work doesn’t end there, of course. With the portable shelters completed, they moved on to designing a two-story shelter complete with kitchen, dining area, sleeping quarters, classroom and much more, all up to Virginia codes.