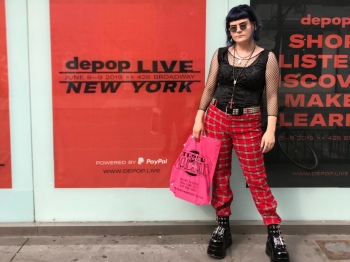 Sophie Smith outside of Depop offices during fashion week.

Connoisseurs of eighties and nineties punk and alternative fashion know her as MadLadz when shopping for retro style clothing on Depop.com. However around the halls of Porterfield Hall she goes by Sophie Smith, a junior in the graphic design program. Smith recently embarked on an entrepreneurial venture in fashion sales that landed her an expense-paid, VIP trip to New York Fashion Week where she mingled with other like-minded designers and executives of the Depop platform.

Smith has always had an interest in thrift store culture and buys her clothing from secondhand stores. When a friend told her about a website called depop.com that specializes in thrift, resale, and avant-garde clothing, she quickly fell in love with the online community. Seeing it as a fun way to downsize her closet, she decided to open a shop and try selling some of her older outfits. Just over one year later, Smith’s shop has cultivated a small but dedicated fan base of around 8,000 followers. 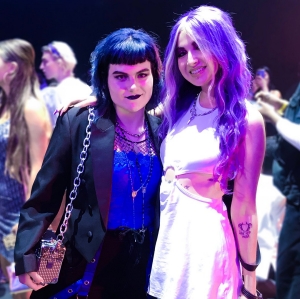 Smith (left) poses with "InternetGirl," a top-seller on the Depop platform.

In August of 2018, Depop announced on Instagram that they would hold a contest to fly one shop owner to their V-files fashion show during New York Fashion Week. Smith entered the contest not expecting to hear anything back. To her surprise, shortly thereafter she was announced as one of three semi-finalists. The winner would be decided by Instagram audiences voting for their favorite shop. Despite having the smallest amount of followers among the three finalists, Madladz was declared the winner. Smith was elated. “I was shocked because the shop is only a year old,” said Smith. “I did not imagine that I would get this kind of support and be able to win.”

Depop arranged for Smith and her husband, Sam Malesky, to fly to New York City from September 5 – 7, 2019. From their hotel they were driven to the Vfiles Runway show where they were treated with a VIP experience, getting to go behind the scenes and meet with designers, models, resellers, and stylists. “It was amazing,” Smith recalled. “I got to meet top Depop sellers who I’ve been following for a while. There were high-profile models and fashion designers all over the place. There were reality TV stars with cameras following them around. It was a very unique experience.” 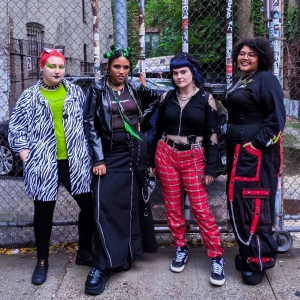 Her VIP seats landed Smith right at the edge of the runway where she could see both models and performing artists up-close. The event consisted of four separate runway shows along with musical performances. At one point a chaperone mistakenly escorted Smith to the model’s dressing area where she began mingling with some of the models and taking pictures with them. This ended up being fortuitous, as Smith was able to make connections with several models and photographers due to the mishap.

Smith says that while the fashion show was both impressive and unforgettable, her favorite part of the experience was getting to network with other New York-based Depop sellers and learn how they conduct their businesses from the Big Apple. They compared notes about how they acquire merchandise to sell on their stores, and it turns out that running an online resale shop from Southwest Virginia has some advantages. According to Smith, thrift shops in New York City are small and crowded, making it difficult to find nice items for resale. However in rural Southwest Virginia, thrift shops are very large and seldom crowded, making the experience of acquiring merchandise much easier and more pleasant. After chatting with other sellers, at least one of them has made plans to visit Smith in Virginia to take a break from the bustling city and visit thrift shops in this area. Smith also plans to return to New York in the future to continue networking with sellers in that area. 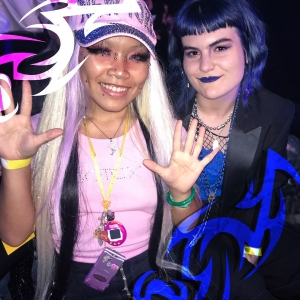 She says the experience energized her about where her business is heading and what her plans are for the future. When she started the program at Radford, she imagined that she would pursue a full-time position as a graphic designer. However, with the surprise success of her shop, she is considering using her design skills in a different way by expanding her merchandise to develop her own lines of clothing and jewelry.

“I was weary before going to New York,” Smith admits.  “I put in so many hours each week into working on the shop, and along with school work it was making me really tired. Winning this trip allowed me to take a short break but still be surrounded by what I love. I feel more energized now to keep on trucking with what I’m doing.”

Smith attributes the success of her shop to her studies in graphic design. “The way I set up my shop, I do all of my own photography and graphics. I design stickers, ads and logos, and I would not have been able to make those things look good if I had not selected graphic design as my major.”

Madladz shop is available on Depop.com or audiences can follow her on Instagram to keep up with her latest adventures in alternative retro fashion.