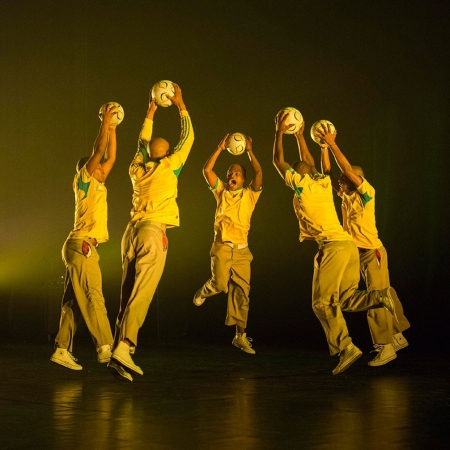 Through energetic and rhythmically intricate movements, the Festival of South African Dance communicates a perseverance of the human spirit and spreads awareness about the socioeconomic and political challenges facing South Africa. Two distinct groups share these stories through their historical dance traditions in an uplifting and entertaining evening at Radford University at 7:30 p.m., Oct. 10, 2017, at the Bondurant Auditorium.

The two groups included in the festival are Real Actions Pantsula and Stimela “The Gumboot” Musical. They originate from Johannesburg, South Africa, and include 19 dancers and musicians.

“One of Modiga’s missions is to take South Africa’s youth off the street in an effort to give them a life free from the harmful influence of their community through the power of dance,” reads the group’s biography.

Pantsula dancing, which began in the early 1980s as an art form, consists of quick, syncopated steps set to modern music. It evokes political overtones, often speaking out against Apartheid, socioeconomic injustice in South Africa, and the AIDS epidemic.

Real Actions Pantsula seeks to distinguish themselves by having a positive impact on their community through their passions for dance and hope to revive the spirit of ‘Ubuntu,’ a Zulu word meaning “humanity.”

Critically acclaimed, South African playwright Thapelo Gordon Motluong wrote and directed Stimela “The Gumboot Musical.” This part of the Festival of South African Dance uses narration, music and Gumboot dance to tell a tale about rural African men in search of a better life in the City of Gold, Johannesburg. They endure harsh conditions in the gold mines in order to make a living and send money back to their families. A young Zulu man who left behind his mother and the love of his life tells the story through a series of flashbacks.

Showcasing the history of Gumboot dancing, this musical incorporates Gumboot choreography, also known as Isicathulo. Started in 1880s, European settlers transported Africans to Witwatersrand, South Africa to mine for gold. Because the mines often flooded, the settlers provided the miners with gumboots to protect their feet. Prohibited from speaking while working, the miners would jangle their ankle chains as a form of communication. Gumboot dancing uses Wellington gumboots and the same method of body movements in a contrasting pattern, reminiscent of the way the miners would move their chains to communicate.

Together these two groups provide an authentic expression of South African life and cultural heritage. The performance is at 7:30 p.m., Oct. 10, at the Bondurant Auditorium at Radford University. Tickets are $15 for general public seating, $7.50 per child, and those with Radford University identification are free. Visit radfordactivities.com to buy tickets online or they are available at the Hurlburt Hall Information Desk or the evening of the performance. Call 540-831-5420 for more information.