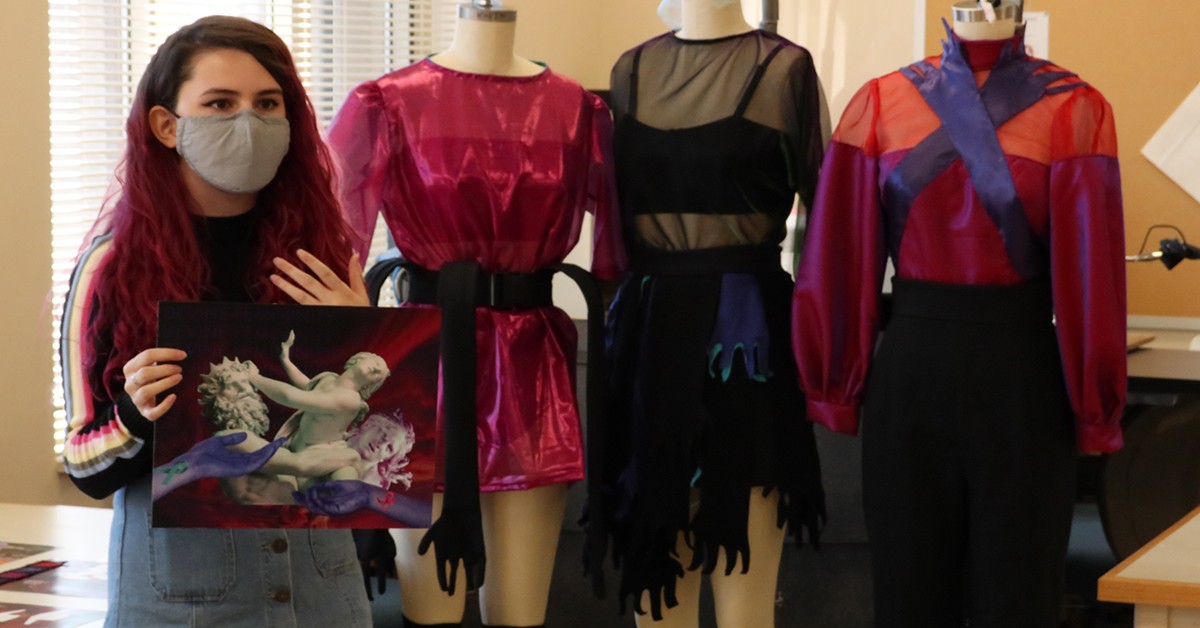 Senior design major Morgan Gray presents garments from her "Hands Off" collection, which is featured in the Department of Design's 2021 spring fashion show.

Students in the Department of Design are showing off their latest fashion creations. The spring fashion show, normally held as a live event on campus, is premiering online as a virtual event. The show was directed by Assistant Professor Rebecca Dias, who oversees graduating seniors as they piece together their final fashion design ensembles at Radford University. Dias says that she also received help from fellow Assistant Professor Dr. Bruce Parsons, who produced and edits the show. A virtual show was initially created for fall 2020’s “Fashion Fete” event, however as ongoing pandemic protocols continue to limit the size of crowds, the fashion design faculty decided to showcase this event as a virtual show too, with hopes of returning to live fashion shows in fall of 2021.

Dias says that the students have done great work and should be proud of their accomplishments. While audiences will watch the unveiling of the collection over the course of only a few minutes, students have been working to conceptualize and create their ensembles for nearly eight months. Students not only design their own garments around a theme of their choice, but they also participate in designing the fashion show itself, including styling the ensembles, which locations to shoot, and other decisions related to visual presentation of materials.

Senior design student Morgan Gray will unveil her collection called “Hands Off,” which deals with themes of sexual assault. “I’m super-proud of my work. It came out exactly how I wanted it to. I’ve only been sewing for three years, so it was a challenge. I’m proud that I could pull this off,” says Gray. She also gained a lot of experience using a laser cutter to create components for several of the garments in her collection.

Gray says that she fell into design somewhat haphazardly, but is glad that she ultimately became a fashion design major. She recalls taking an interest in making clothing as far back as when she was ten years old. “The first time I wanted to sew was when I watched Adventure Time and I wanted to make Finn’s hat,” she laughs. She decided to attend Radford University to pursue a business degree, but when she arrived on campus and found out about the fashion design program, she decided to try it out and ended up declaring it as a major.

Fellow senior design major Eleni Tufa will also be debuting her collection titled “Ayne Bego,” which translates to “beautiful eyes” in the Ethiopian language Amharic. Originally from Ethiopia, Eleni says that she was disappointed that there could not be a live fashion event, but is excited to be realizing her lifelong dream of being a fashion designer.

Tufa’s collection of ensembles takes traditional Ethiopian formal attire and gives it a more modernized look. She says that many formal occasions in Ethiopian culture call for white attire. Her designs introduce colors and patterns to those types of garments. Her goal was to represent her culture while offering something that is different with a more modern style.

“Since I was a child, I would want to take clothes and cut them up and refashion them into new garments,” says Tufa. She began taking fashion design classes when she moved to Texas from Ethiopia during high school. Her experience cemented her passion for the field, and she would later choose Radford University specifically for its fashion program. The Department of Design’s small class sizes were advantageous for overcoming communication barriers, as she was able to spend more time working directly with her professors.

Professor Dias says that the students’ concepts and designs are very strong, and hopes audiences will take a few minutes to appreciate their hard work. “Apart from just being entertaining, it is a great way to recognize young talent and appreciate their workmanship. They have invested substantial time and money sourcing appropriate fabrics and creating beautiful garments,” says Dias.