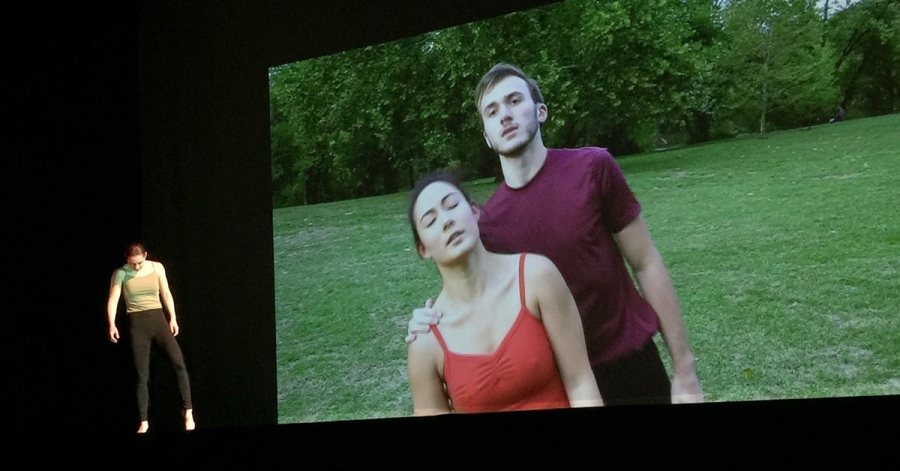 A dance student rehearses as videotaped dance footage is projected onto the main stage of Bondurant Auditorium. 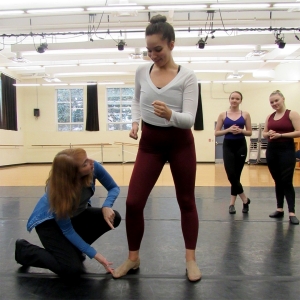 For many students, fall semester begins at a somewhat leisurely pace. As students get a feel for classes and ease into the series of lessons that will take place over a sixteen-week period, they also have time to socialize and mingle with friends and colleagues to catch up on their summer activities. However, dance majors at Radford University kick their fall semester off at a much more frenetic pace. The very first Thursday of classes begins with auditions for “Fall Dance Fest,” then rehearsals begin the following week.

“Fall Dance Fest” takes place each October, and intense preparations consume a substantial amount of time for students involved in the annual production. According to Associate Professor James Robey, Chair of the Department of Dance, the audition and rehearsal process imitates how professional dance operates in the real world, and the experience largely becomes what each student makes of it.

Stephanie Sheline is a freshman dance major who successfully auditioned to be in this fall’s program. “I was definitely nervous, but I think it’s important to do the audition early on so the dance can be rehearsed with as much time as possible before the show,” she says.

Sheline says that, while the first few weeks were challenging, she became more comfortable with both the schedule and her colleagues over time. “I really enjoyed the new environment, especially as a new student. It was nice to be immersed in the program from the start,” she said. 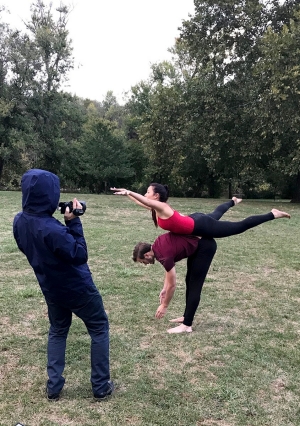 Dance students are videotaped during an outdoor performance for inclusion in James Robey's choreographed work.

Associate Professor Amy VanKirk is one of five faculty choreographers whose works will showcase during “Fall Dance Fest.” VanKirk’s piece involves a lot of upperclassmen, and Sheline was selected to perform with that cast. Being a first-year student, she found some advantages to working with Vankirk’s cast. The friendships she developed with more seasoned students made it easier for her to seek advice from colleagues who had already survived their freshman year in the program.

VanKirk has been involved with concert and choreographing original works at Radford University since 2013. According to her, this year’s piece, “A Pulsação,” specifically explores samba rhythms, movements and style. “It explores the crossover between jazz dance and samba and how they can be interrelated,” she says.

Along with being among the five faculty choreographers for the event, Robey also acts as the artistic director for “Fall Dance Fest.” He says that the festival is unique because it is the only concert that combines Radford’s Ballet Theatre and the Contemporary Dance Theatre companies.

Vankirk says that coming out to see “Fall Dance Fest” is a great way to support fellow students and be exposed to different art forms that many may not have experienced before. Robey agrees, adding that the opportunity to see live dance performances at Radford University is unique for a small community. In major cities, tickets to choreographed performances can cost hundreds of dollars. “The chance to see live dance performances on campus - especially for this price - is something that you’ll never have the opportunity to do at that cost ever again,” says Robey.

Fall Dance Fest will take place at Bondurant Auditorium in Preston Hall on October 24 and 25 at 7:30 p.m. A 2:00 p.m. performance will follow on Saturday, October 26. The show is free to Radford students, faculty and staff with an RU ID card. General admission is $7 and the price for children is $3.50. Tickets are available for purchase at radfordactivities.com.