The cast rehearses the second act of The Drowsy Chaperone. Opening night is April 12. 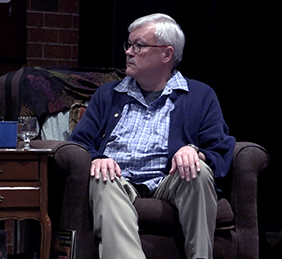 Professor Wesley Young as “Man in Chair” who brings a 1920s musical come to life in his apartment.

Musical theater will return to Radford University on April 12 as the Department of Theater and Cinema presents a Tony award-winning comedy, The Drowsy Chaperone, a loving send-up of the Jazz Age musical.

The story centers on a nameless character, “Man in Chair,” who spends a dreary afternoon listening to his favorite cast recording of a fictional 1920s stage production, The Drowsy Chaperone. Before long, the forgotten musical comes to life in his living room with the man guiding the audience through it.

Radford Theater Professor, Wesley Young, who plays the character, describes him as a “slightly agoraphobic, middle-aged man who is obsessed with musical theater who tends to turn to his cast recordings when he’s feeling low.”

But The Drowsy Chaperone is not a downer, by any stretch. It’s packed with wild, over-the-top characters and rousing musical numbers in the spirit of 1920s stage extravagance.

“It’s a musical that tries to make you feel good,” says director Molly Hood. “People are going to come and have a good time.”

The Drowsy Chaperone is the first musical Radford’s theater department has produced since Oklahoma! in 2018. It has drawn student performers from music, dance and even one biology major in addition to the school’s top theater talent. 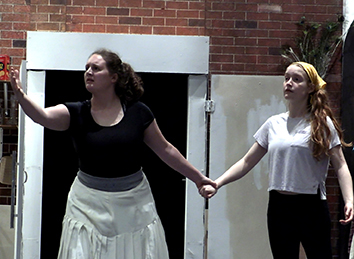 “It’s been fascinating to develop this type of character . . . how does she walk? How does she move?” Merriman said, snapping into an elegant, commanding pose. “And standing like someone who thinks she’s all that and a bag of chips is a lot of fun.”

Reghan Cutler plays the title character, the so-called “drowsy chaperone,” aging actress Beatrice Stockwell, who is tasked with keeping the bride and groom separate until the wedding.

But the upstaging diva is not particularly good at this undertaking, says Cutler.

“She’s very controlling and wants it the way she wants it, but she drinks a lot,” Cutler said. “She’s drowsy, let’s just say that.” 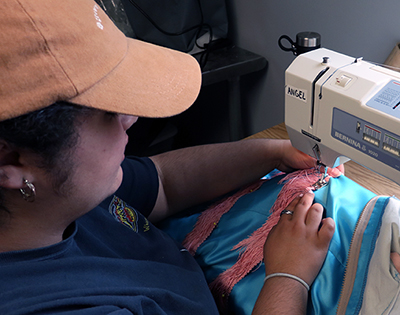 Angel Pacheco has both a stage role and has orked as the assistant costume designer for the show.

Iman Redmon plays Mr. Feldzieg, an anxious and overbearing producer whose sole interest is maintaining his show at all costs.

“This is the first musical I’ve done where it’s just a party,” Redmon said.

“You have to keep your stamina up,” he noted. “There’s a lot of dancing and running around and craziness in this show.”

Angel Pacheco has the stage role of Trix, the Aviatrix, but has also worked as the assistant designer in the costume shop.

“It is a collaborative process,” she explained. “It really does take every single person doing their job to the best of their abilities to do what we do.” 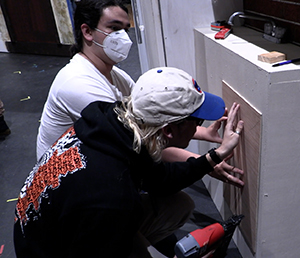 Logan Burnley and Christopher Kobersteen add doors to a prop cabinet on stage as the production nears opening night.

There is also a Curtain Up! fundraiser on opening night with cocktails followed by dinner and the show. That event starts at 5:30 in the Scartelli Atrium in Covington Center for Visual and Performing Arts.

Tickets are available at the door, in the box office at 240 Walker Hall, online at https://rutheatretickets.universitytickets.com or by calling 540-831-5289.