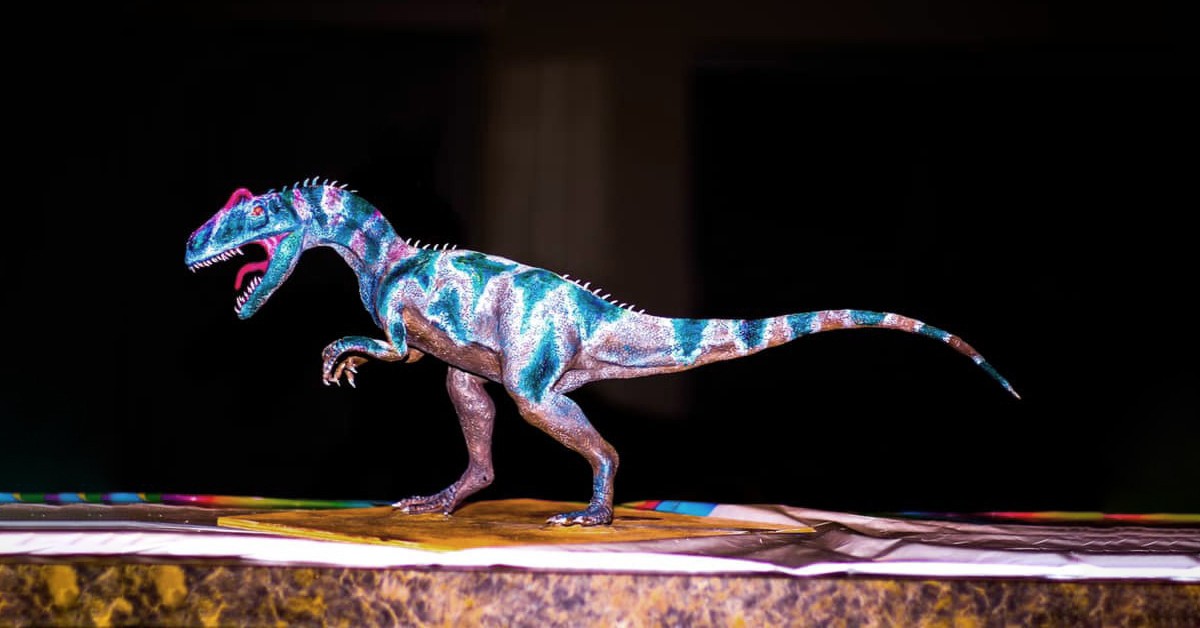 Many of us share a childhood fascination with dinosaurs. Fossilized bones from those prehistoric, extinct creatures have sparked the imaginations of countless children hosting toy dino-battles in schoolyard sandboxes across the globe. However, for junior graphic design major Ling Jie Gu, the intrigue of these mysterious creatures followed her into adulthood, and led to a recent artistic work becoming part of a permanent display at the Virginia Museum of Natural History in Martinsville, Virginia.

Gu, who has a variety of artistic interests, taught herself sculpture and in the spring of 2019 she decided to create a small allosaurus model for fun. She worked on the personal project off and on during the course of the spring term, completing the roughly eighteen-inch long model by the close of the semester. Her design was based on a display of fossilized allosaurus bones in an exhibit at the Virginia Museum of Natural History. Once she finished it, Gu says the sculpture was taking up a lot of space in her apartment, so she decided to contact the museum to see if they would have any interest in using it for educational purposes. “My inspiration was from the skeleton they had on display, so I thought it would be a great way to educate the public about that particular specimen,” she says.

Her offer was brought to the attention of Adam Pritchard, the Assistant Curator of Paleontology at the Virginia Museum of Natural History. Upon seeing pictures of the sculpture, he was immediately impressed. “It was clear that a lot of attention had gone into the shape of the allosaurus,” says Pritchard. “A lot of artwork that tries to depict extinct animals is not always based on detailed studies or an understanding of the actual proportions of original fossils. This not true of Ling Jie’s sculpture. It is very, very accurate based on how a real skeleton of allosaurus is put together.” 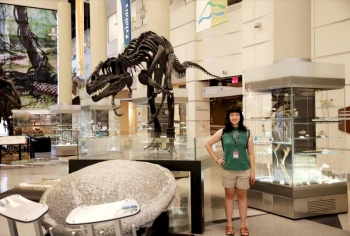 Graphic design student Ling Jie Gu poses beside a fossilized dinosaur skeleton at the Virginia Museum of Natural History. The museum's allosaurus display was the inspiration for her sculpture.

Pritchard agreed to accept her sculpture as part of their permanent display, so Gu drove to Martinsville to deliver it to the museum. Pritchard placed it in the museum’s vertebrate paleontology collections area. “It is one of the first things people see when they walk into the room. I can now point to something in our collections area that accurately depicts what an allosaurus was shaped like,” says Pritchard.

While visiting the museum to donate the sculpture, Pritchard invited Gu to see some of the museum’s original specimens of fossilized dinosaur bones. They spoke at length about the creatures and theories about how the animals lived and functioned. During the conversation, they also chatted about the possibility of Gu doing an internship with the museum next summer, though Gu says that nothing has been confirmed regarding that prospect yet.

Gu’s love for the subject matter comes out easily when chatting with her. The mention of “Jurassic Park” during a conversation opens up a discussion of what was accurate and what was changed to increase Hollywood box office ticket sales. And unless you want to be disappointed by reality, it’s probably not a good idea to ask her about velociraptors as they appear in the film franchise.

Gu says that she hopes to use her skills and knowledge to one day design museum exhibits that inspire, teach and fascinate others. Her dream job would to work at the Smithsonian Institute in Washington D.C. Given her aspirations, one can understand how having her sculpture accepted by the Virginia Museum of Natural History was a huge thrill. “It was very exciting and an honor!” she says. “This was the first time I did something like this. It is a great way to educate the public about the anatomy of allosaurus fragilis.”

Gu continues to explore her fascination with the monsters of ancient history as well as studies of general biology. She makes dinosaur-themed artwork and has been helping the Radford Museum of Earth Sciences with some upcoming displays in their collection. In the meantime, audiences can check out her original allosaurus sculpture currently on display at the Virginia Museum of Natural History in Martinsville, Virginia.