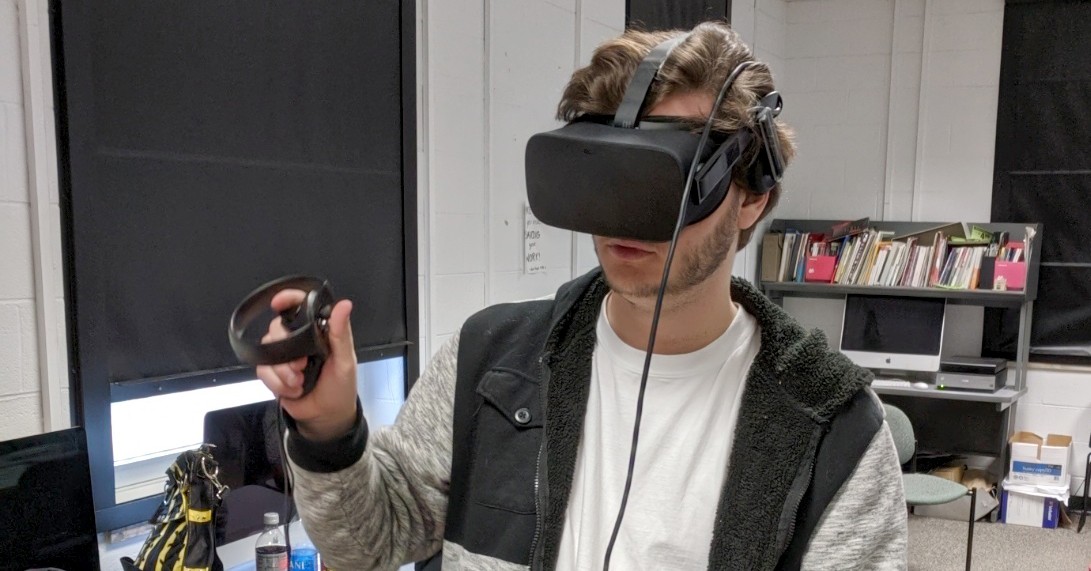 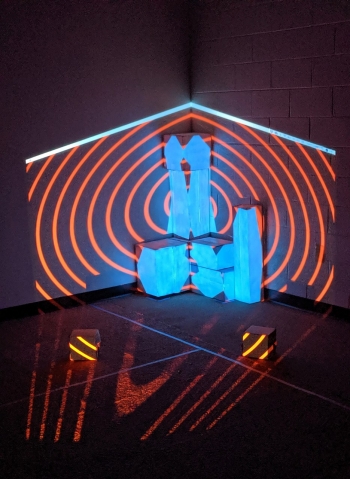 A projection mapping project set up by students in ARTS 306.

Students in Assistant Professor John O’Connor’s Emerging Technologies in Graphics Visualization course (ARTS 306) spent the fall 2019 semester learning about innovative new methods for communicating information to audiences. During the course of the term, students worked on augmented reality projects, virtual reality, 360 degree video, 3D printing, projection mapping and drone photography. O’Connor says the impetus for the class was to keep abreast of rapid changes in the design industry. “The last few years have seen an explosion in graphics technology due to advances in smart phones, digital capture-display-output, computing power, and miniaturization. This class covers those technologies that have the greatest potential to influence the future of graphic design and visual communication,” says O’Connor.

O’Connor says that numerous colleges and universities have courses dedicated to these topics, but what makes this course unique is that it touches on all of these areas in a single course with an emphasis on their usefulness to the graphic design field. He says the course is currently only open to graphic design students, but he believes that it may open up to other areas in the future, especially to students studying in communications fields.

The reason for creating and offering the course emerged from unique new trends in the technology used to communicate to audiences. One example is the “19 Crimes” wine bottle labels, which became a viral sensation due to the company’s innovative way of making its wine label characters come to life to tell a story about their product. O’Connor says more and more of these innovative ideas are popping up in the marketplace as the technology becomes cheaper and more accessible. For instance, a former graphic design colleague of his who works in Southwest Virginia has been working on an augmented reality project with a company that makes plant and seed labels distributed across the United States. The company is working on creating a similar style advertising campaign that will use augmented reality for its seed and plant labels.

Students taking the course have overwhelmingly positive reactions to the content. Taylor Exum, a junior in the graphic design program, says she enjoys the variety of new topics being taught in the course. “We are exploring technologies like virtual and augmented reality. We used a 360 degree camera and took so many cool photos and videos around campus and other locations. One of my favorites was projection mapping. There are so many unbelievable things you can do with it, and we only scratched the surface of what it can do,” says Exum.  Michael Conway, another junior in the program, finds the class to be both useful and a refreshing break from more design-focused courses. “It’s a good break from grinding at your computer all day long. It gets you outside and also puts you in virtual environments,” says Conway.

Technological trends continue to open up new realities for how people interact with software. According to O’Connor, “the maturation of hardware and software of 3D virtual reality headsets like Oculus Rift and their ability to create both 2D and 3D art in a virtual environment is amazing. Those creations can then transition from the virtual world to the real world with the ability to print out the creations utilizing 3D printers.”

O’Connor says the overall goal of the class is to introduce students to many of the new cutting-edge visualization technologies that are quickly being adopted in visual communication and design.