‘Darkside’ to bring perils of space exploration to stage

Students pause for a break during a rehearsal session of "Darkside." 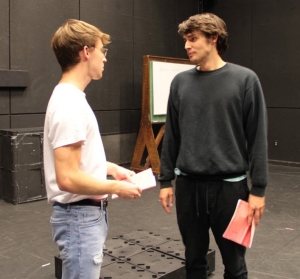 Cast members rehearse for the October production of "Darkside."

“Darkside” is the story of three American astronauts on a fictitious Apollo 18 mission who become stranded on the moon as their command module pilot suffers a mental breakdown. Written in 1988 by Ken Jones, the play explores the human aspects of working in the dangerous and high-stress world of space exploration.

“It’s a story of trust, loyalty, honesty and isolation,” senior Timothy Glover said. “It really dives into the strength of the human mind as well as the vulnerability of it.”

Glover is a theatre major with a concentration in directing and performance and is the director of this upcoming production. The cast was announced in late August and Glover and his team have been working to get the show ready for its opening night on October 23, 2019, in Hawes Studio Theatre in Porterfield Hall.

Glover has been active in theatre for almost ten years and this will be second play he has directed for Radford’s theatre program. His preliminary work for “Darkside” involved consulting with costume, set, lighting and sound designers to bring this story to life in an intimate, black box theatre setting. According to Glover, he begins by discussing general ideas of what he has in mind, then allows the designers to develop creative solutions to enhance the production. “It’s a very collaborative process. We’re all working together,” said Glover. “It can be tough but you have to know how to work with people and work together to reach the end goal.”

While the designers work through ways to create the play’s environments and settings, Glover has been rehearsing with his cast. “They each embody their characters and they’re very, very innovative,” said Glover.

Cast member Adiya Koram, who plays Capcom in the production, said that her character is different from any other role she has ever had because she will be acting as a voice and not physically interacting with any other characters. “They don’t see me but I’m standing on the stage,” she said.

The story is serious and dramatic in tone, but there are some comedic moments sprinkled throughout. “Finding those moments where you can have comedy in this very serious show is a little bit of a challenge, but it’s the fun part as well,” Glover said. The psychological decline of the pilot creates life-threatening situations for his fellow astronaut crew members. According to Glover, a central theme of the story revolves around the fact that people cannot always get through situations alone, and there can be terrible consequences when people don’t get the mental help that they need. 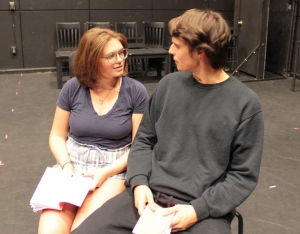 Glover realized around ten years ago that he wanted to pursue a career in theatre. He takes profound satisfaction in affecting people through emotional storytelling and really enjoys helping actors develop characters that bring stories to life on stage. In the future, he has plans to attend graduate school and ultimately hopes to be able to teach theatre. He said that professors in Radford’s theatre program make students realize the importance of careful preparation, punctuality and bringing a positive attitude to productions, and he would like to be able to make a similar impact on the lives of others.

Glover believes that stories like “Darkside” are important because they highlight the sacrifices that astronauts make for the sake of exploration and knowledge. “People really put their lives on hold to serve and everyday people don’t usually see that,” he said.

“Darkside” runs on October 23 through 26 at 7:30 p.m., with a final performance on October 27 at 2:00 p.m. All performances will take place in the Hawes Studio Theatre in Porterfield Hall. Tickets for admission are currently available for free at rutheatretickets.com or can be acquired at the Porterfield Box Office beginning on October 21, 2019.