Arts education in the age of coronavirus 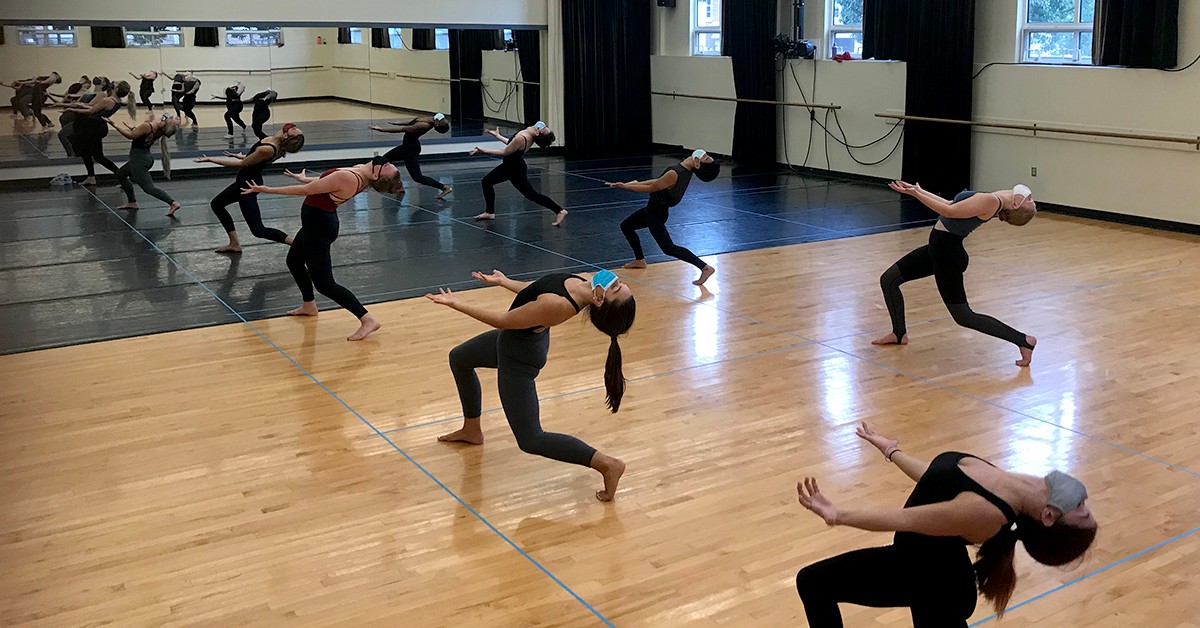 In April of 2020 Radford University administrators announced their intentions to return to in-person classes in the fall semester. The university adopted a number of changes to be able to bring students back to campus in a safe manner, including requiring the use of face masks while on campus and limiting social gatherings to a maximum of ten participants. The College of Visual and Performing Arts had to resolve additional challenges to be able to offer meaningful instructional experiences for its majors. Each of the five disciplines within the college had to rethink approaches to instruction in order to offer safe educational experiences during the ongoing pandemic. 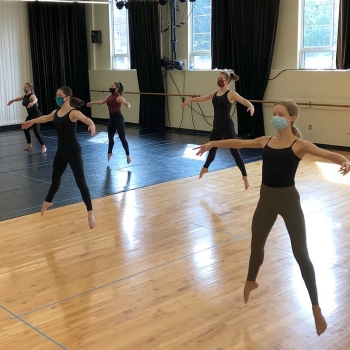 The Department of Dance faced a particularly difficult set of challenges given the nature of traditional dance instruction. Rehearsal spaces have been blocked off into 10’x10’ grids in which individual dancers are confined while working together in the studio. Only nine students can be in a studio during a lesson. “Partnering exercises have been sidelined for now so we’ve been delving deeper into other areas of physical study,” said Department Chair James Robey. Dance faculty worked together over the summer to determine how to conduct classes. They also followed recommendations from trade organizations such as the National Dance Education Organization and the National Association of Schools of Dance.

Facilities Management also played a part in creating a safe environment for dance students and faculty. “They looked at the air flow in our studios and modified the system to make it safer,” said Robey. “They can regulate the percentage of fresh air coming into the studios. It was a real relief to know that they could add this safety measure to our classes.”

Reagan Mihailoff, a senior in the dance program said that she is glad instruction continued in a face-to-face manner. “This is my senior year and the worst thing in the back of my mind during summer was that I would not be able to continue training,” she said. Dance students, like all students at Radford, must wear masks while in class, and Mihailoff admits that this created a challenging adjustment. “It’s hard on stamina and breathing, but we’re all just happy to be in a studio dancing so we deal with it.”

Professor Amy VanKirk commended students’ perseverance through the variety of changes that have occurred due to the pandemic. “Dance majors have been wonderful about wearing masks and cleaning our studio space at the close of classes. They have been working as an ensemble and are being very responsible because they want to stay and continue with classes.” 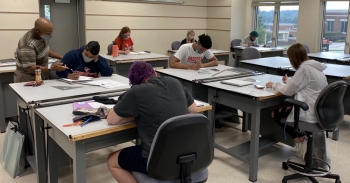 The Department of Design encountered its own challenges this semester, but it was also able to offer face-to-face instruction for many of its courses. Professor Farrell Doss, Ph.D. said that he is glad the university did not switch entirely to online instruction. “Design is a very hands-on profession and students won’t get the experience of being a craftsperson without the ability to work with materials,” he said. While Doss teaches some online courses, he sees disadvantages compared to face-to-face modalities. “Some students do well online, and if they can do well in that environment they’ll do well anywhere. But not all of our students are that versatile because they haven’t been taught how to learn online. It requires strong time management skills that many undergraduates have not yet developed.”

The department’s annual Fall Fashion Show, normally held in Bondurant Auditorium to large crowds, was converted to a virtual format this term. Students and faculty worked together to craft a ten-minute runway-style video showcasing student designs. It was released on the college’s social media outlets and departmental website with exceptional fanfare from audiences. Department Chair Holly Cline, Ph.D. said that while the department regrets not being able to showcase students’ work to a live audience, she imagines that in future semesters the fashion show will continue to feature some type of media-based presentation to showcase the program’s talent to larger audiences. 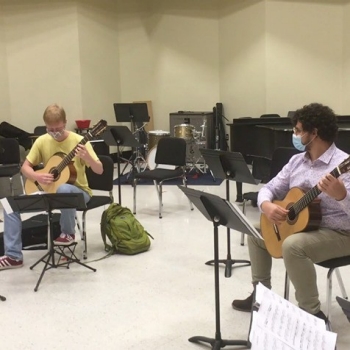 Faculty in the Department of Music were forced to make a number of changes to their curricula amid the coronavirus pandemic. Dr. Meredith Bowen began working on her classes during summer and developed them using hybrid models. She planned for them to be easy to convert to online instruction should the university be forced to shut down campus again as it did during the spring 2020 semester. “I’ve been doing choir for almost 40 years now and this is nothing like what I’ve been doing before, but we’re making it work,” said Bowen. One of the major changes for choir students has been shifting rehearsal schedules from four hours each week to two hours of in-person sessions, followed by an additional two hours of online, asynchronous learning. The choir group has around 40 participants, which is too large to hold rehearsals with everyone together. On Mondays Bowen has roughly 20 students socially distanced in the Covington Center’s Davis Performance Hall while the remainder join through Zoom. She said her ideal situation would be to rehearse in an outdoor amphitheater, but since there is not one available on campus she chose this format for the fall semester. “It’s difficult because I can’t hear the people at home, but we’re still making it work,” said Bowen.

Bowen also said that music students and faculty have been experimenting with numerous software programs designed for musicians. The department has found some success with products that are currently on the market such as “My Choral Coach,” “Go React,” “The Acapella App,” and others. “I will never go back to a semester without ‘My Choral Coach’ again,” said Bowen. The software can transmit translated music to students so that they can play it back and practice along with the track. Students are able to record themselves singing and the software’s real-time feedback allows them to see areas where improvement or modifications are needed.

Bowen said that the shifts in rehearsal style were difficult at first but that the group is adapting well. “It’s hard to sing in a mask behind a face shield,” she said, “but we’re giving ourselves the grace to make mistakes.” The extra precautionary measures are necessary as research has shown that loud voices produce more aerosols, which is a primary method of person-to-person transmission for the coronavirus. Bowen misses singing collectively in an environment where vocalists are not muffled by face masks. While sessions via Zoom are safe, the software often experiences audio lags that can make instruction challenging. The department is looking into software solutions to be able to hold online rehearsals in real time with larger groups. 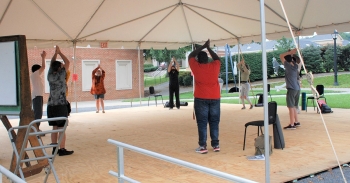 The Department of Theatre and Cinema also made a number of changes this semester. Faculty in the program have been utilizing an outdoor canopy that was pitched just outside of Porterfield Hall. The space allows classes to practice safe social distancing in an open-air environment while rehearsing or playing out classroom scenarios. Depending on how cool fall weather becomes the tent may no longer be an option, but plans are to limit indoor classroom meeting times if sessions have to be moved indoors.

Live productions have changed significantly as well. The theatre program will not be offering performances to in-person audiences this term. Instead, audiences will be able to acquire tickets for productions that will be performed live online. Theatre will offer several online productions for the fall semester.

The department’s touring group, the Porterfield Ensemble, canceled its normal schedule of performances and will instead work with the School of Communication and the CITL's John Hildreth to produce an original script written by Professor Wesley Young and members of the ensemble. The plan is for students to record the performance using the television studio in the College of Humanities and Behavioral Sciences. The studio features a large green screen that will allow settings to be created digitally around the actors as they perform.

During normal semesters, Porterfield Ensemble spends the first half of a term planning and rehearsing before embarking on a touring schedule at high schools and middle schools across the state. Students even offer talkbacks for audiences at select locations. “It’s a marvelous experience for the students,” said Professor Wesley Young, who heads the Porterfield Ensemble. “Over the past couple of years we’ve played to around 2000 people each fall.”

Once the pandemic hit, Young had to rethink his approach to the project as touring was no longer a feasible option. “I thought that if I could involve students in the writing and development process, and if it were created for the camera instead of the stage, then students would get more on-camera experience, which we don’t do as much of,” said Young. During development, he came up with the idea of creating inexpensive sponsorships to support the performance. For a small donation, individuals or groups would be able to sponsor access to the performance for Virginia schools where the ensemble normally tours. He and students in the course continue to work through plans to offer the production to audiences via digital channels. Young said that anyone interested in learning about how to purchase a sponsorship for the program should contact him at wyoung@radford.edu. 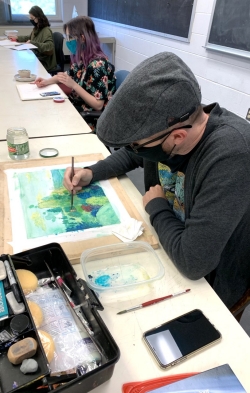 The Department of Art contains a variety of disciplines, including painting, drawing, graphic design, ceramics and sculpture. Faculty have been forced to reconfigure studio spaces to maximize social distancing where in-person instruction continues. However, overall disruptions have not been significant. Professor Ken Smith teaches an illustration class and said that while the experience has had some challenges, the results are working out well. The class is small enough that he can easily remain six feet away from students, and he has been using an application called Padlet that allows him to conduct group critiques with students in his classroom, as well as those attending the class remotely through Zoom. In some programs such as graphic design, the switch to online instruction has proven positive in that lessons can be recorded and edited using tools such as Camtasia. Materials are presented asynchronously to students allowing them to work through software demonstrations at their own pace before applying new techniques to their creative assignments.

While the pandemic has caused significant disruption to many aspects of academic life, the arts at Radford University have discovered innovative ways to keep students on track toward achieving their career goals. Faculty, staff and students continue their educational journeys through inventive, meaningful new approaches to education. Margaret Devaney, Dean of the College of Visual and Performing Arts, said that she is proud of the work that has been done to continue educating students in the arts. “Our faculty and staff have worked tirelessly to be able to offer meaningful educational experiences to our students and their innovation and determination has been truly inspiring,” said Devaney. “While we look forward to a day when we’ll be able to take off these masks and safely carry on with our lives, there will most certainly be lessons from this experience that carry over into post-COVID arts education.”