Departments of English and Theatre collaborate on medieval French farce 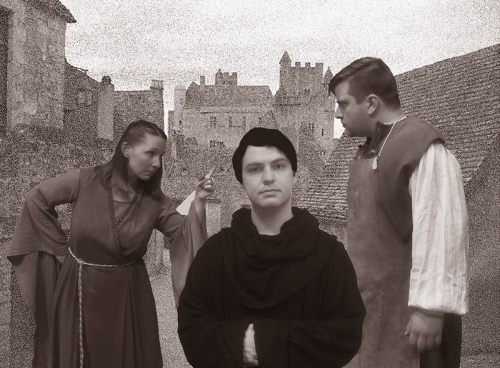 “The Farce of Martin of Cambray,” translated into modern English by Jody Enders as “Cooch E. Whippet,” depicts a dysfunctional relationship between a husband, Cooch and his wife Wilhelmina. Radford University Departments of English and Theatre present this collaboration at 6 p.m., April 18 and 19.

This bawdy, medieval French farce features mayhem and a mischievous plot. Cooch, a cobbler by trade, locks Wilhelmina in their house when he travels to sell his wares. In his absence, and partially in response to Cooch’s attempts to curb her freedom, Wilhelmina plots an amorous escape with Father John, the parish priest.

When Cooch returns, Wilhelmina goads him into a shouting match until he yells “The devil take you!” In response to this invitation, Father John—dressed as a devil—puts Wilhelmina on his back and carries her away. Cooch, horrified to see his wish has come true, searches frantically for Wilhelmina and prays for her return. Father John disentangles himself from Wilhelmina long enough to ensure Cooch that the devil has not actually taken his wife, promising, first, to excommunicate the perpetrators and, then, to spend time “on [his] knees offerin’ up something just as tender” as Cooch’s own prayers. It turns out he isn’t talking about a “Hail Mary.”

After John and Wilhelmina dawdle for a while, Father John (still in his devil costume) returns Wilhelmina to Cooch, who asks Wilhelmina about hell. When Wilhelmina assures him that jealous husbands get “the full torture treatment,” Cooch begs for forgiveness and gives Wilhelmina literal and symbolic control of the house. She receives the keys that Cooch used to lock her in the house, she dons the tool belt that had belonged to Cooch, and the play ends with an oath, in which Cooch swears to be a good husband.

This production is a collaboration between the Departments of English and Theatre. It will travel in May to the Mostly Medieval Theatre Festival, part of the International Congress on Medieval Studies.

The crew includes both a theatre staff member and students, along with an English professor. Theatre costume shop manager Cathleen O’Neal designed the costumes. Addie Pawlick is the stage manager and lighting designer. Christina Viglietta designed the set and the sound designer is Shawn Carver. Amanda Kellogg, assistant professor of English, is the Dramaturg.

Performances are April 18 and 19 at 6 p.m. in Porterfield 235, the old television studio. Tickets are free, but there is limited seating available. Click here to reserve a seat.

Contact Beach at dbeach6@radford.edu or Napolitano at fnapolitano@radford.edu for more information.