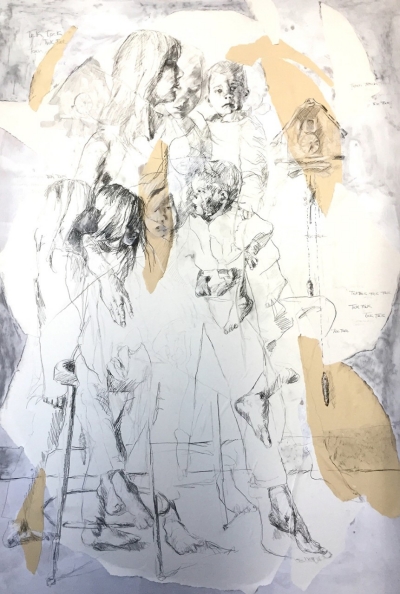 Tina Butterfield ’07 is a full-time teacher and artist specializing in drawing, painting and mixed media. When she began work on a series of large drawings and mixed media collage pieces, she had in mind that she wanted them to deal with themes specific to being a woman. Her first completed piece in the series became a self-portrait of her and two of her children titled “Tick Tock Surrender Control.” The work was recently purchased by the state of New Mexico for $35,000 and will be permanently displayed in the Hobbs Allied Health Nursing Building at New Mexico Junior College.

Butterfield says that she was thrilled to have her work selected for purchase. “This was a really personal work,” she said. “The themes, ideas and content of this piece have been under development for about ten years. It took me a long time to figure out how I was going to shape it and create it.”

The artwork is a 4’x6’ mixed media collage using traditional pencil, charcoal and ink. It was chosen by New Mexico’s Art in Public Places program through a committee selection process. Butterfield says that her artwork has been purchased through similar programs before, but that this is the highest price that she has been paid through this type of program.

Butterfield, who originally grew up in Kansas, is an assistant professor of art with Western Colorado University where she teaches painting, watercolor and advanced drawing. While working toward her master’s degree at Radford University, she developed a close bond with Dr. Halide Salam, who was her primary advisor during the process. “She is the one who really lit the spark beneath me to understand the deep importance of connecting with the art I create. She showed me how to move beyond technique and focus on ideas and why I’m doing them.” Now a college professor herself, Butterfield says that she often quotes her former mentor to her art students.

Butterfield also features some of her original works at Midnight Gallery in Colorado. Those interested in learning more about her art can find information on the gallery’s Facebook page.