Actors and crew work behind the scenes in Pridemore Playhouse preparing for the upcoming production of 'Almost, Maine.'

The Radford University Department of Theatre and Cinema will bring the lighthearted comedy, “Almost, Maine” to homes around the world over a five-day run beginning November 11, 2020. The story follows a series of tender-hearted, funny, and mildly surreal encounters in the fictional town of Almost, Maine. Told through a series of vignettes, the play features interconnected themes and characters that explore love and relationships.

“Almost, Maine” will be live-streamed to audiences on each of its production dates. Assistant Professor Robyn Berg, who is directing the play, said that producing a play specifically for online distribution introduced new difficulties for the cast and crew that went beyond the usual repertoire of theatrical production challenges. An entirely new team was created to deal with the technical aspects of camera and streaming setups. Student crew members have been working to build a technical configuration consisting of multiple cameras on the stage of Pridemore Playhouse in Porterfield Hall.

The story of “Almost, Maine” will be told largely through the point of view of its various characters. When audiences at home watch the play, they will be seeing through the eyes of actors as they interact with one another. Berg says the decision for this production style came from dealing with a number of challenges brought on by the pandemic. The story deals with themes of love, connection and relationships. When told in normal circumstances, the performance would involve a lot of physical contact by actors. “Simple things like two actors snuggling on a park bench or placing one’s head on the shoulder of another had to be rethought,” says Berg. The cast and crew continue to work through solutions for various scenes that would normally require physical contact. Berg says that she is pleased with creative solutions that the students have been coming up with in order to portray affection between characters who, in most cases, will not even be occupying the same set. 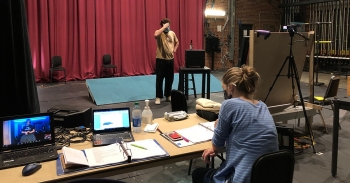 The set design in Pridemore Playhouse is a first for the department. The stage has been split into two sets. Each utilizes a single camera for an actor. While actors will be performing as though they are in the same scene together, in reality they will be performing to a camera on separate sets designed to look like the same environment. The process introduced a number of new challenges for both actors and crew. Shaly Farmer, a senior in the theatre program, is both an actor and a lighting designer for the show. She admits that in both roles she has had to delve into uncharted territory. “From an acting standpoint, not being able to be with a scene partner is very weird. The whole time I’ve been in classes I’ve learned about establishing a physical connection and an eye connection with fellow actors. Now you’re trying to have that emotional connection with a camera lens. It has taken some time to get used to,” she laughs as she describes the experience. She began to realized how different acting toward a camera would be when they started blocking movement during rehearsals. Even basic actions like exiting a scene had to be carefully choreographed due to the orientation of cameras within the scene. “It required a lot of testing to figure out how to move in a way that will make sense and not look awkward to the audience,” says Farmer.

Berg says that she is proud of the work of the cast and crew and is eager to bring something uplifting to audiences. “This is a dark time and it is easy to not be positive about the world right now. However, this story is light-hearted, fun, sweet and tender. Sometimes we just need sit down and forget about bad things in the world, and ‘Almost, Maine’ will allow us to do that. I hope that it will be a relief for audiences,” says Berg.

Tickets will be available starting November 2, 2020, by visiting https://rutheatretickets.universitytickets.com/