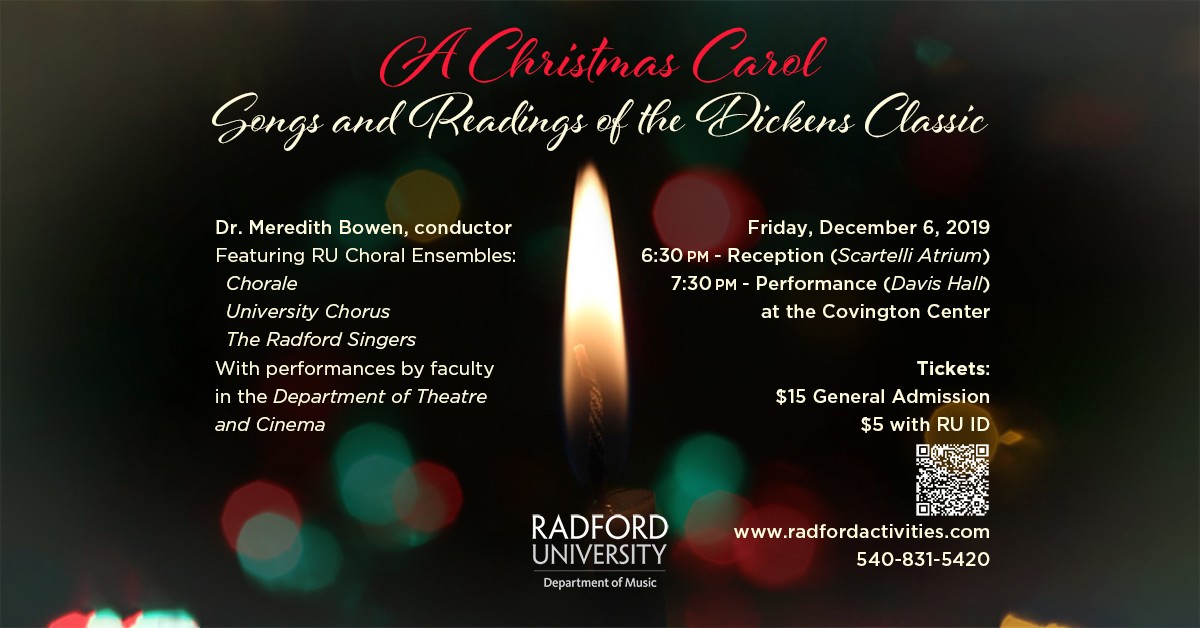 On Friday, December 6, 2019, the Department of Music will present “A Christmas Carol: Songs and Readings of the Dickens Classic.” Assistant Professors Meredith Bowen (music) and Molly Hood (theatre) created this choral theatre event that will tell the classic story of Ebenezer Scrooge, whose miserly ways are revealed to him by a series of ghosts on a dreary, frigid Christmas Eve in nineteenth century London.

The story will be told as a mix of readings, performances and music that will be interspersed throughout the story. The acting cast consists of Molly Hood and Wesley Young (theatre) and 9-year-old Laken Thompson. Each will portray multiple characters throughout the story. Ensemble choirs from the Department of Music will perform a variety of musical pieces that accompany the narrative.

Bowen says that she is excited to be able to work with Hood to bring the classic holiday tale to audiences. “Molly and I met during new faculty orientation four years ago. We immediately hit it off and started talking about collaborations,” she said. During their conversations, they discovered a shared fondness for Charles Dickens’ classic tale. This will be their first time partnering on a musical theater event, but it will not be their last. The two have a spring 2020 event in the works that will put Shakespeare to music.

Hood, who adapted the script from Dickens’ original work, says that she is thrilled to be collaborating with her colleagues to bring this performance to stage. She rewrote and condensed portions of the story to allow it to flow in and out of the various musical pieces that Bowen has planned to present. “This is an opportunity to hear the beautiful voices of Radford’s choirs and to encounter ‘A Christmas Carol’ and the story of Ebenezer Scrooge in a new way. Three actors will be performing over twenty characters!” says Hood.

Professor Young says that he is thrilled to be able to play Ebenezer Scrooge as one of his characters. Like Hood and Bowen, Young also has a love of Dickens’ tale, and is no stranger to bringing the story to life on stage. During his career, he has done several versions of the classic story, including a college production, a national tour, and served as an assistant director for one version of it. “I have played Bob Cratchit and various others but never Scrooge. And I am just yearning to play him,” says Young.

Conducted by Bowen, the Department of Music’s choral ensembles, Chorale, University Chorus, and The Radford Singers, will perform music during the event. According to Bowen, the musical pieces were selected to underscore the story’s narrative arc. “Molly edited the original book to forty minutes of storytelling for three actors and I chose music for the singers that either propels the story forward or reflects on the action, similar to opera or musical theatre, but for choirs,” says Bowen.

The choral theatre event replaces the Madrigal Feast, which had been offered as a holiday-themed dinner event in years past. The Department of Music wanted to create something fresh and new for the holidays, and this collaborative work between music and theatre faculty offers a new way for audiences to get into the holiday spirit for less cost than a multi-course dinner event.

Tickets for “A Christmas Carol: Songs and Readings of the Dickens Classic” are on sale now at www.radfordactivities.com. Prices are $15 for the general public and $5 for students, faculty and staff with an RU ID. The show will begin at 7:30 p.m. in the Davis Performance Hall in the Covington Center, but guests should plan to arrive at 6:30 p.m. at the Scartelli Atrium to enjoy a light reception prior to the show.