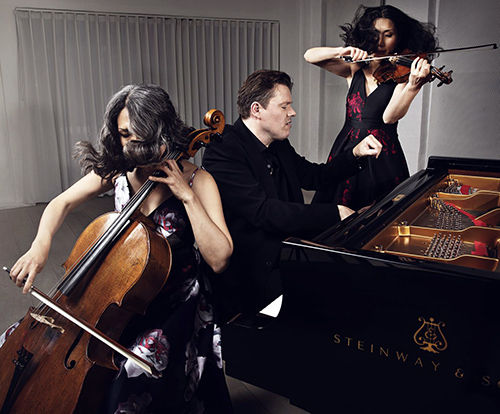 Trio Con Brio Copenhagen is composed of Jens Elvekjaer (piano), his wife, Soo-Kyung Hong (cello) and her sister, Soo-Jin Hong (violin). Radford University is their second to last stop before returning to Denmark.

On Tuesday, October 11, Radford University’s College of Visual and Performing Arts will host a free concert by Trio Con Brio Copenhagen, a widely acclaimed group known for their passionate and powerful interpretation of classical music. The concert is the first of three events in the University Performance Series for the 2022-23 academic year.

Trio con Brio Copenhagen is a fusion of two overlapping “musical pairs.” Two sisters, violinist Soo-Jin Hong and cellist Soo-Kyung Hong, are from South Korea. Pianist Jens Elvekjaer, Soo-Kyung’s husband, is from Denmark, where the group is based.

Founded at the University of Music and Performing Arts in Vienna in 1999, the trio is recognized for its exceptional musicianship, fresh approach, and adventurous programming.

Trio Con Brio Copenhagen has won several international competitions since their formation and released award winning albums including “Shostakovich and Arenksy,” the winner of German Record Critics’ Award in February 2022.

Shostakovich’s “Piano Trio No. 2 in E minor, Op. 67” will feature in the performance as well as works by Beethoven and Prokofiev.

The event will take place at 7:30 p.m. in the Davis Performance Hall in the Covington Center on Radford University’s main campus.

The concert is open to the public. No tickets are required.