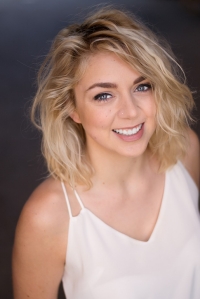 In the spring of 2015 Lauren Faulkner walked across the stage at Radford University completing her bachelor’s degree with a double-major in theatre and English. After graduating, the Rocky Gap, Virginia native moved to Los Angeles, California to pursue her dreams of becoming a successful actress. In May, 2018, she took a major step toward achieving that goal when she won Best Supporting Actress in the ONIROS film awards for her role in the short film, “Attendance is Required.”

The film’s story revolves around a restaurant server named Lonny who has just returned to his job after being suspended for poor conduct. The restaurant manager holds a mandatory meeting where Lonny is forced to confront his ex-girlfriend Jacy (played by Faulkner) for the first time since their break-up.

According to Faulkner, her casting in the film came about as a result of one of those ‘right place, right time’ situations that are often associated with the film industry. She had just finished up an audition for a voice over part and as she was leaving the facility she encountered the film’s director who was taking a break from a casting session for his project. During their conversation he admitted that he was disappointed with the turnout for his casting session and suggested that she step in and audition for a part in his film. “I jumped at it!” said Faulkner. “As much I consider myself an actor who likes to be prepared, cold reads are my favorite. I stepped into the room not knowing a thing about the film or the role. I made some choices and just went with it! It wasn't long after that I was contacted by the director informing me that I'd been cast!”

“Attendance is Required” is her second film role following the short horror film “The Bizarre Act of Samantha,” which was released in 2017. While Faulkner studied stage theatre at Radford, she admits that making the jump to motion pictures was not without its challenges. “My favorite thing about being an actor has always been the connection I'm able to make with my audience,” she said. However, in film the live audience is replaced with a camera and crew that work in complete silence during takes. Faulkner says that while the lack of an audience was initially daunting, the idea that motion pictures last forever became a source of inspiration for her when developing the characters that she portrays.

Faulkner is staying busy and enjoying her life in Los Angeles. She recently shot scenes for a music video for the artist Anyx which is set to debut very soon and she has been doing modeling work between acting gigs. She is also enrolled to take courses at the Antaeus Academy of the Antaeus Theatre Company in Glendale, California. She recently completed a successful audition to be able to take courses with the prestigious theatre company.

She attributes her work ethic to her training in the Radford theatre program. According to Falkner, “my education has influenced everything about the way I work: the way I approach a text, prepare for a role, execute an audition, spend a rehearsal. And though my process as an actor is ever evolving, I believe Radford gave me an incredibly strong skill set to pull from.”