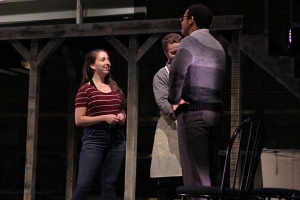 Director Megan Ward (left) discusses a scene with cast and crew members during a rehearsal of 'The Laramie Project.'

In October of 1998, Matthew Shepard, a 21-year-old gay man, was brutally beaten and left to die in near freezing temperatures in the open plains outside of Laramie, Wyoming. The incident instantly rocketed onto the national news scene, casting a spotlight on the violence and prejudice that the LGBTQ community often endures. Shepard’s death sparked national and international activism and led to the passage of the Matthew Shepard Act by President Barack Obama in 2009, which provides additional funding to authorities prosecuting a wide range of hate crimes.

Perhaps the most famous artistic response to the crime was the creation of “The Laramie Project,” a theatrical production by Moisés Kaufman and members of the Tectonic Theater Project. The play chronicles the events surrounding Shepard’s death and its aftermath. During the year following his murder, writers and actors from the Tectonic Theater Project conducted interviews with the townsfolk of Laramie, Wyoming. Using information gathered from their research, they crafted “The Laramie Project,” a play that has since been viewed by over 30 million people worldwide. 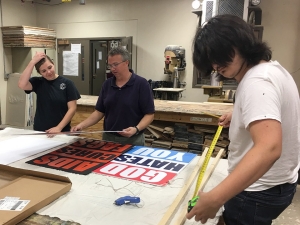 On the twentieth anniversary of the death of Matthew Shepard, the Radford University Department of Theatre brings “The Laramie Project” to the stage of Pridemore Playhouse in Porterfield Hall. The production tackles complicated subject matter aimed at promoting thoughtful discussion of human rights and social injustices. Senior theatre major Megan Ward was excited to be selected as the director, admitting that it is one of her favorite plays. “I’m hoping that if audiences don’t know about the Matthew Shepard story that they will learn about it. We filter both sides of the story. There are characters in this play that have very strong opinions against gay people and we are not going to shy away from that. We are trying to depict it as it is written in the script and be true to who these characters are, because they are real people,” says Ward.

The stage design and planning for the play is complex. A cast of eight actors plays nearly sixty characters. Professor Michael Meindl from the School of Communication helped the creative team integrate multiple projectors featuring live video feeds and multimedia content into the production design. According to Ward, “Our rear projection screen will project a live camera feed, so there are times when actors are holding a camera while shooting another actor and the video is projected onto that screen. It will add another element to this gritty production.” 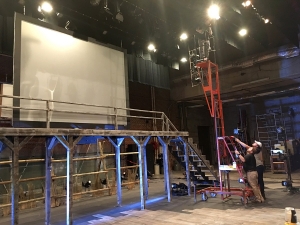 Tickets for showtimes on October 16, 18 and 21 are available here.

Tickets for showtimes on October 19 and 20 are available here.