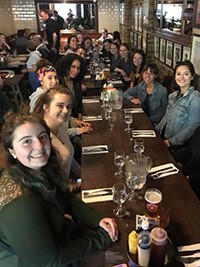 May 2018 will be long remembered by a group of dance and theatre students who spent the last half of the month in Europe experiencing theatre and dance performances in Ireland and England. Professors Deborah McLaughlin (Dance) and Robyn Berg (Theatre) served as faculty supervisors for the study abroad course. The class was open to all Radford students, however the itinerary was designed for those with an interest in dance and theatre. "The study abroad trip was a great opportunity for all of us and was much appreciated," said Professor McLaughlin. "At times, dance and theatre students participated in events together, and also attended separate performances, dance classes, or backstage theatre tours."

The group arrived in Dublin on Wednesday May 16. During their time in the Irish city, students had opportunities to attend the Dublin Festival of Dance as well as other dance performances at differing venues. Students with an interest in theatre were able to attend performances at several of Dublin’s theatre venues. One highlight for theatre students was the chance to go backstage at Ireland’s famous Abbey Theatre, celebrated for being the National Theatre of Ireland.

Halfway through the course, students transferred to London via train and ferry where they continued experiencing international dance and theatre performances at locations such as the Royal Opera House and The Globe Theatre. They took in performances of “Swan Lake” with the Royal Ballet and “Life is a Dream,” which featured state-of-the-art lighting by Danish choreographer Kim Brandstrup.

"The School of Dance and Theatre trip to Dublin and London was incredibly educational and inspirational! Whether it was a backstage tour of the Abbey Theatre or the National Theatre, seeing quality productions like Assassins at The Gate Theatre or As You Like It at Shakespeare’s Globe or just taking in attractions like the James Joyce Tower or the Victoria & Albert Museum, our students were immersed in the rich cultures of these two European cities. Traveling is a necessity for any artist. It broadens your horizons and allows you to see how others interpret our world creatively," said Professor Berg. "I was very proud of our students for stepping outside their comfort zones and experiencing new places! I am positive the trip provided memories for a lifetime." 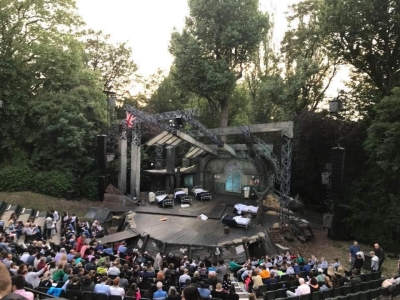