Professor Ross steps down to return to North Carolina

Professor of Photography Andrew Ross speaks at the reception for the student exhibit "Then and Now" on April 9, 2018 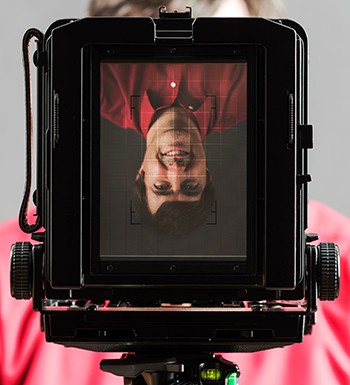 At the close of the spring 2018 semester, Assistant Professor of Photography Andrew Ross will be stepping down from his position to return to Chapel Hill, North Carolina where he lived for many years. His decision comes as a result of medical necessity. During the spring semester of 2017, he began noticing an unusual twitch in his arm. The condition progressed, and he suspected that something neurological might be happening. That summer Ross was diagnosed with Amyotrophic Lateral Sclerosis (ALS), more commonly known as Lou Gehrig’s disease. While he knew this would bring substantial changes to his life, he decided to continue teaching and building the photography program here at Radford University for as long as he could. He hoped that he would be able to continue doing what he loved for more than a single year, but as the condition worsened, he realized that he would be unable to continue living independently. Given his strong network of family and friends in North Carolina, along with more abundant medical resources for his condition, he decided to resign from his post at Radford and return to Chapel Hill.

Ross accomplished a lot during his four years with the university. He is proud of the work he did in expanding the photography facilities and making them more accessible to students in the program. Part of Ross’ teaching philosophy was integrating exhibitions into the classroom experience. “I believe in having students create projects that are exhibited to the community. It gets the students to look at their work differently when it is not just to satisfy a teacher. Also, they get another level of feedback on their work when it is viewed outside of the classroom setting,” said Ross. His drive to incorporate exhibition exercises into his classrooms led to the creation of the “Andrew W. Ross Student Art Gallery” on the third floor of McConnell Library, another feat for which he is especially proud. 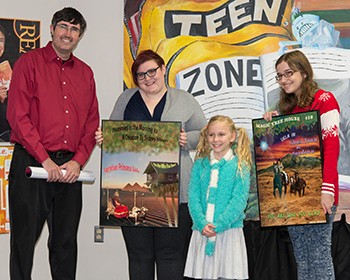 During his time at Radford, he also made it a point to reach out to the community. One of his favorite projects was collaborating with local children at the public library. He had his students make posters of kids as characters in their favorite books. He felt that connecting with the community was an important aspect of a college education, and he encouraged students to undertake projects that could benefit the community as well. One of his final student exhibitions titled “Then and Now” had students researching historical photos of the community through McConnell Library’s archives, then recreating them in their modern-day setting.

Ross came on board with the university in fall of 2014. He was excited about the opportunity to teach both undergraduate and graduate photography students, and also liked that the program included both analog and digital photography methods, something not as commonly found in photography programs of the digital age. Much of his own artwork uses a combination of both methods, so this aspect of the program also complemented his creative approach.

He admits that he will miss teaching in a program with such a wide range of creative possibilities. “I love it when students create work that I would never create myself. I love being able to encourage and give feedback, particularly at the graduate level. How do you nurture an artist when they’re working outside of your strongest areas? How do you keep encouraging people and helping them build upon their own work the way they want to make it? I love those aspects of teaching,” said Ross. 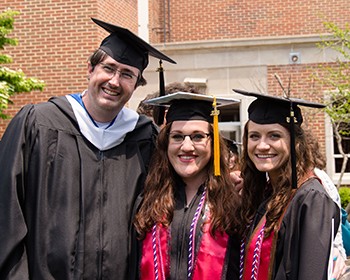 Ross with students at 2016 commencement

Ross intends to remain engaged with education once he resettles in North Carolina. He plans to reconnect with the photography community in that area, and hopes to do some writing about the subject. At this point he is not sure if he will explore philosophical ideas around photography, or perhaps work on a textbook that incorporates the approaches to teaching that he has learned in the classroom.

“Andrew made a lot of contributions to the program in the short time that he was here. He single-handedly set up both the gallery in the dean’s office and the gallery in the library, and did a lot of community outreach through his classroom methods. He had a positive impact on students interested in the discipline and on the graduate program, and was always eager to share his professional knowledge with students. He will be missed,” said Dr. Roann Barris, Chair of the Department of Art.