On April 6, 2018, Radford University music student Alex Lyons stepped out onto the Jefferson Center stage in Roanoke, Virginia and performed in his first opera. The production, titled “La Bohème” by Giacomo Puccini had two weekend performances on Friday and Sunday. The story is a four-act opera that follows the lives of young Bohemians living in the Latin Quarter of Paris in the 1840s. Much of the plot focuses on the relationship between lovers Rodolfo and Mimì, and the complications that arise as Mimì struggles through the end stages of tuberculosis. 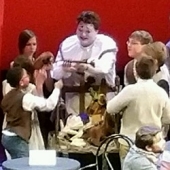 Lyons on stage as Parpignol during "La Bohème"

Lyons, who is pursuing a Bachelor of Science in music with a double emphasis in clarinet and voice, played the part of Parpignol, a toy vendor. He has been an apprentice with Opera Roanoke for a year and a half, but because of scheduling conflicts, this was his first appearance on stage with the organization. Lyons was excited about the opportunity. “It was amazing! I got to perform with so many talented people. It was a little nerve racking at times, singing next to seasoned professionals, but their kindness made all of my fears go away. I could not imagine a better group to perform with than Opera Roanoke!” said Lyons. He also stated that he felt his studies in the Department of Music helped to give him a solid foundation for the opportunity. “All of my voice lessons I have been taking at Radford have really prepared me for the role. In addition, I have taken opera workshops a few times, and the scenes we have been doing have prepared me to be a young professional out in the field.”

Lyons is working to finish up his undergraduate studies and plans to pursue a master’s degree in vocal performance. He hopes to one day be able to sing and perform all over the world.