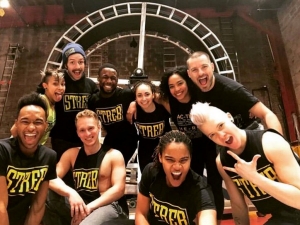 When Brigitte Manga (Dance, 2018) decided to try out for STREB Extreme Action, she was only looking to gain a little extra experience with auditions. The idea that she would be selected to work with the internationally-renowned, New York-based dance company, founded by Elizabeth Streb - a virtuoso in the world of choreography, was a long-shot. The company employs a small staff of full time dancers and positions are highly sought-after in the world of professional dance. The troupe is famous for its unique blend of dance, gymnastics, and circus elements into a style known as Pop Action. Manga was preparing herself to audition for a different dance company and figured that trying out for STREB, while not likely to yield results, would give her more experience with the audition process.

“I had absolutely no idea what to expect since I was initially taking the audition just for the experience,” said Manga. “The auditions were extremely physical and it was definitely one of the most challenging processes I’ve experienced.” 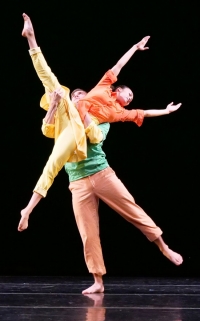 The auditions were physically rigorous and intense. Manga even chipped a tooth during one session when another dancer accidentally elbowed her in the mouth. She took this in stride, noting how supportive the company was to her when the accident occurred. Over the course of four grueling days, thirty applicants were whittled down and ultimately four dancers were offered positions with STREB Extreme Action; Manga was surprised to find herself among them.

“I did not expect to be accepted into the company. I initially had another audition that I was preparing for. After discussing the offer with my family as well as my professor and mentor, Ji-Eun Lee, I knew STREB was for me. The company functions like a team and offers an opportunity that combines my passions for both gymnastics and dance,” said Manga.

Professor Ji-Eun Lee, who worked extensively with Manga during her studies at Radford University, was elated to learn of her former student’s success. “Brigitte's commitment and humble professionalism inspire me in my own role as an instructor, and I have never hesitated to recommend her for dance companies and international events, as I feel she is mentally and physically ready to work as a professional. Supporting her in her success has been truly rewarding for me, and I am convinced that she will rank as one of Radford University’s most celebrated dance alumni,” said Lee. 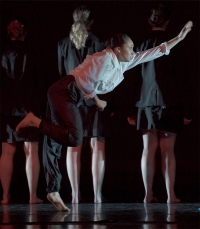 Brigitte Manga performs during "The Condition of Disappearance," choreographed by Ji-Eun Lee.

Professor James Robey, Chair of Radford University’s Department of Dance, was also excited to hear about Manga’s accomplishment. “STREB Extreme Action is an internationally recognized, one-of-a-kind, New York City-based movement company. The company’s founder, Elizabeth Streb, is an innovator and pioneer who challenges the accepted definitions of dance and movement performance. Positions with the company are difficult to attain,” said Robey.

Manga attributes her success to her experiences studying with the Radford University Department of Dance. She says that she is especially grateful for professors in the program, noting that their encouragement helped her find her full potential.

Manga’s long-term goals include dancing in a contemporary company and perhaps even working on Broadway. For now, however, she can bask in the glow of accomplishment, relishing a success that few professional dancers will ever achieve as a member of one of the most pioneering dance companies in the world.