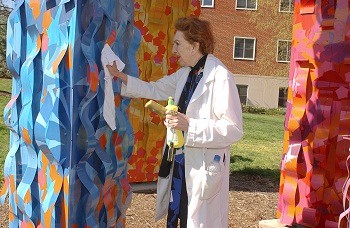 Dorothy Gillespie next to her original sculpture 'Sky Castles'

In 2020, the Radford University Art Museum and the Taubman Museum of Art will hold retrospective exhibits of the late Roanoke, Virginia native and Radford University Distinguished Professor or Art, Dorothy Gillespie (1920 – 2012). During 2019, the Taubman museum, located in Roanoke, Virginia, will display sculptures from Gillespie’s “Color, Light and Motion,” a massive and magnificent outdoor installation featuring 185 pieces that was displayed at Rockefeller Center in New York City in 2003. The planned public display of her sculptures will lead up to a centennial celebration of the famous artist in 2020. Other sculptures from the Rockefeller Center collection will be on display in the newly constructed Melrose Branch Library, also located in Roanoke.

Radford University’s College of Visual and Performing Arts will also celebrate her artistic works as well as her contributions to the university. The Radford University Art Museum will begin its centennial celebration by showcasing pieces from its extensive collection of artworks by Dorothy Gillespie in the Art Museum at the Covington Center from September 11 through December 6, 2019. 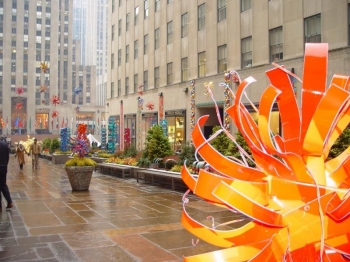 Gillespie is closely connected to Radford University. During her time as a distinguished professor, she visited campus numerous times and mentored art students in their studies. She also began the museum’s permanent collection of artwork and continued to augment it well into the 21st century. The Radford University Art Museum currently houses 98 pieces of her original works spanning six decades of her career. Her artwork can be found throughout the campus of Radford University in various offices and departments.

Gillespie’s art took a variety of forms including painting, drawing and sculpture. Her works and commissions have been on display across the United States, including locations such as New York City, New Jersey and the Walt Disney World Resort in Orlando, Florida. The Dorothy Gillespie Foundation is currently working with a variety of organizations across the country to celebrate the centennial anniversary of her birth in 2020.