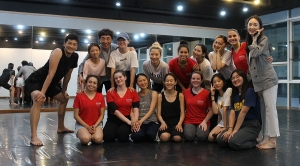 Radford University dance majors Sebrena Williamson, Fiona O’Brien and Zoe Couloumbis have been invited to participate in the Incheon International Dance Festival this November in South Korea. In addition to showcasing their own choreographed works, they will also teach classes to international dance students during their time at the festival. The achievement is unique for undergraduate dance students, as their travel, lodging, and meals will be paid for by Incheon. Their invitation comes as a result of spending two weeks in Korea this summer collaborating with Korean artists in a variety of events.

In July, Williamson, O’Brien and Couloumbis traveled to Seoul, South Korea with fellow dance majors Brigitte Manga and Celinna Haber to gain professional international experience collaborating with the Korean dance association, Incheon. During their time abroad, the students choreographed original compositions with Korean dance professionals and presented their work to various live audiences. Their performances were well received by members of the organization, resulting in an invitation for Couloumbis, O’Brien and Williamson to return to South Korea in November to participate in the Incheon International Dance Festival. 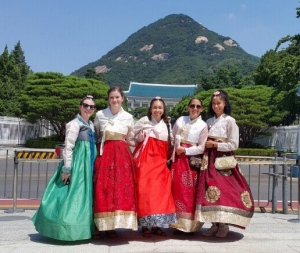 The group of students spent over two weeks actively engaging in multiple dance events during their time in the country. After their initial work with Incheon, members of the group traveled to Cheongju to participate in the Songbum International Dance Festival. There they visited the historic Sangdang Sanseong Fortress, a modern-day tourist attraction that was once the personal home of a former South Korean president. During this overnight excursion, Couloumbis, O’Brien and Williamson gave solo, duet and trio performances before being joined by Korean dancers. Their performances were filmed and photographed for use in promotional materials for the next edition of the festival. At the conclusion of filming they dined with academy leaders and were given a tour of the historic site. Couloumbis recalls her experience in Cheongju as being particularly memorable. “We performed again later that evening at a historic site on a hill. There was a line of dancers across the top of the hill and you could see their silhouettes against the backdrop of the setting sun. It was a surreal moment for me,” said Couloumbis. 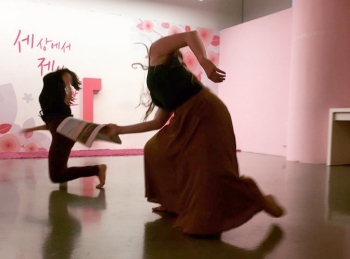 The next day those students would return to Seoul to perform at an art museum in the Gangnam district. The museum featured a series of exhibits in different galleries each focusing on a different aspect of beauty. The students were asked to give a public performance celebrating the theme of the exhibition. They planned ahead and developed a dance in which the public followed them through each gallery of the art exhibit, altering their performance as they moved to match the tone of each section. According to O’Brien, “We presented a 50 minute show with 9 sections. Each of us choreographed three sections. We chose the music and costumes ourselves. We had no idea of how the space looked, but incorporated our choreography with the surrounding art gallery that was themed around beauty standards, identity and self esteem.”

Fellow dance majors Manga and Haber performed contemporary dance pieces in the Seoul International Dance Competition, which is Asia’s largest international dance competition. The two dancers went on to become finalists. “The experience of being in Korea and performing in the competition was like nothing I have ever done before. I couldn't make a comparison if I tried. Every day of the competition brought more excitement and pride. When we found out that we made it through the preliminaries and semi-finals we were in complete disbelief; everything seemed unreal while it was happening,” said Haber. 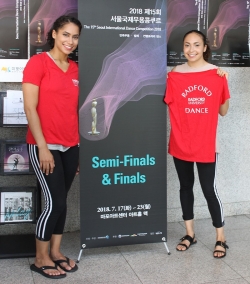 Brigitte Manga and Celinna Haber were finalists in the international competition.

The excursion was organized by the Professional Dance Career Development Program which was launched for Radford University dance students interested in developing careers in the national and international dance industry.

The students expressed their excitement about the unique experience and the multitude of new ideas and concepts they were exposed to while in the country. They also spoke highly about the experience of visiting another country and interacting and dancing with people from another culture. “I will not forget the hospitality we experienced,” said Couloumbis. “The welcoming atmosphere of the country and the people we worked with was very close and very nice.”