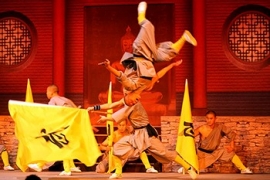 On Wednesday November 7, 2018 at 7:30 p.m. the Radford University College of Visual and Performing Arts will host the high-intensity martial arts and acrobatics show, "Chinese Warriors of Peking" at Bondurant Auditorium in Preston Hall. Set during the Ming Dynasty, "Chinese Warriors of Peking" tells the tale of two rival martial arts disciplines competing in the ancient Chinese capital of Peking. Under the direction of Qui Jian, the performance provides a culturally enriching experience filled with juggling, acrobatics, weapons handling and live stage combat. The family show is intended for all ages and features some of the world's greatest acrobats and a host of undisputed masters of martial arts.

"We are thrilled to have such an impressive international spectacle kick off the 2018-19 University Performance Series season. Audiences will be truly amazed by the high-energy physicality and breath-taking acrobatics that this group of performers brings to the stage," said Margaret Devaney, Dean of the College of Visual and Performing Arts.

The show is performed by the "Tai An Acrobatic Troupe" that was founded in 1958 as a group of Chinese acrobats and martial artists. "Chinese Warriors of Peking" has toured extensively across the globe over the past two decades. Members of the troupe have toured with the American UniverSoul Circus as well as Cirque du Soleil. The company has won numerous awards for its bicycle and slack-wire performances, ring diving, spinning plates and acrobatics routines.

Tickets are available now at www.radfordactivities.com or by calling the Hurlburt Hall Information Desk at 540-831-5420. Prices are $15 general admission, $7.50 for children, and free for Radford University faculty, staff and students with an RU ID.